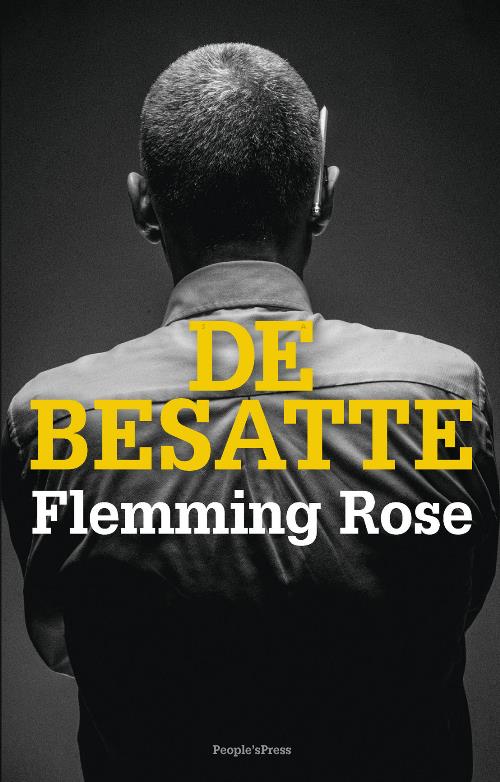 Flemming Rose is the former culture editor of Danish newspaper Jyllands-Posten who, in 2005, published the Muhammed cartoons and launched a global controversy. In a new book, De Besatte (The Possessed), Rose claims that far from defending freedom of expression, Jyllands-Posten attempted to gag him and to prevent him from saying or writing anything controversial. The Danish paper Information interviewed me about the case. This is a (rough) translation of the article.

The British author and commentator Kenan Malik wants to make clear whom it is we betray when Jyllands-Posten or any other newspaper in open societies such as Denmark or the UK do not stand up for freedom of expression. It is not just ourselves but also those who are struggling for freedom in countries like Bangladesh and Saudi Arabia – countries where the struggle has far greater consequences for those who lead it. Kenan Malik has called the newspaper’s actions as ‘deeply troubling’, but he does not see it as the worst case of what he calls a kind of rallying cry for opponents of free speech: ‘I am for free speech, but…’

He believes that in Europe we have internalized the fatwa, censorsing ourselves almost routinely and finding many excuses to avoid having fully to defend freedom of expression. So he was not surprised by revelations in Flemming Rose’s book De Besatte, released last week. The book claims that from 2011 Jyllands-Posten tried to stop Rose, at that time the paper’s foreign editor, from talking or writing about the cartoons that the newspaper had published six years earlier, while all the time presenting itself as a symbol of the struggle for freedom of expression.

‘There is much hypocrisy and pretense’, notes Kenan Malik. ‘There are few individuals or organizations that want to say publicly that they are opposed to freedom of expression, but there are few who will fully defend it. This is partly because of fear but partly also because we have come to accept that it is morally wrong to cause offence to other peoples or cultures. Jyllands-Posten is no different’, he said, adding that while it is understandable to worry about the safety of employees, it can also be an argument for rationalizing restrictions on freedom of expression. ‘Fear is understandable, but fear has often been used to rationalize one’s unwillingness to talk about certain things. And the more we self-censor in the name of fear, the more Islamists and others will play on our fears to force us to curtail freedom of expression. The more we licence people to be offended, the more people will be offended. It is a dangerous road to go down.’

Kenan Malik tells of an episode from the time he sat on the board of Index on Censorship. ‘Index on Censorship is perhaps the most prominent free speech organization in the world. In 2009 there was an interview in the magazine with the Danish sociologist Jytte Klausen, who had written the book The Cartoons that Shook the World about the Muhammad cartoons crisis. The book was published by Yale University Press, but just before its release the publisher removed all the cartoons that were to be used as illustrations. The main theme of the interview was the irrationality of the publisher’s decision to censor. But, ironically, the board of Index on Censorhip refused the editor of its own magazine the right to publish the same drawings to illustrate its article. I was the only board member who publicly dissented.  So we should not be surprised by Jyllands-Posten’s actions. They are problematic, but not, in this context, particularly surprising’, says Kenan Malik.

– What should Jyllands-Posten have done differently, including with regard for the employees in mind?

– So we have in Western societies a special responsibility to such people?

‘It’s not a question of a special responsibility. We just have to be aware that they are the ones whom we betray when we do not stand up for freedom of expression, when we insist that it is wrong to give offence, when we accept that it is right to self-censor.’

– You have written that you once asked your fellow writer Hanif Kureishi, if he thought that Salman Rushdie’s The Satanic Verses would been been published today, to which he replied that it is unlikely the novel would even have been written at all…

‘Yes, and Rushdie himself has said much the same. What has happened is that we have internalized the fatwa. We don’t need an Ayatollah to impose a fatwa because we so often impose it on ourselves as Jyllands-Posten came to do. This internalization is  troubling. One of the greatest threats to freedom of expression today is that we do not recognize a threat as a threat. When we think of threats to freedom of expression, we think of censorship by governments, the imprisonment of journalists or of violent attacks such as that on the offices of Charlie Hebdo. These threats are important to acknowledge and to fight, but there is also a more insidious threat that comes from self-censorship and the development of a culture that accepts that it is wrong to cause offense. It is a culture that has emerged in Europe in the past 25 or 30 years, where liberals have come to accept and even demand restrictions on free speech in the name of tolerance and respect.’

Malik sees the fatwa imposed on Salman Rushdie after the publication of The Satanic Verses in 1988 as a watershed moment, in response to which came the developments that have made us much more accepting of self-censorship. And he points out that the minorities in whose name censorship is imposed are often the ones who suffer most from such censorship.

‘The decisive shift came not with the Muhammad cartoons, but with the Rushdie affair. It helped create a culture of self censorship, partly through fear of violence, and partly through a moral desire not to offend other peoples. Those who suffer most from such censorship are often, however, minority group themselves. Those who benefit from censorship are not the powerless but rather those with both the power and the need to censor. The idea that we must not offend suggests that certain beliefs are so important or valuable to certain people that they should be put beyond the possibility of being insulted, or caricatured or even questioned. The importance of the principle of free speech is precisely that it provides a permanent challenge to the idea that some questions are beyond contention, and hence acts as a permanent challenge to authority. As soon as we restrict the right to offend, we limit our ability to challenge power and injustice. That is why freedom of expression is so essential for minority communities, for those without power, and for those who challenge injustice’, he said.

‘I am for diversity, for freedom of movement. I oppose the calls to restrict Muslim immigration. But I have also long been critical of multiculturalism as a set of political policies the aim of which is to manage diversity. As a political policy, multiculturalism attempts to manage diversity by putting people into ethnic and cultural and religious boxes and using the boxes into which people have been put as a way of shaping public policy. The aim is to minimize conflict by preventing antagonism between different groups. When we talk about diversity, what we mean is that the world is a messy place, full of clashes and conflicts. That’s all for the good, for such clashes and conflicts are the stuff of political and cultural engagement. All societies are conflictual; diversity is important because it allows us to engage in political dialogue and debate that can help create a more universal language of citizenship. I am for diversity and for such social engagement, but I am critical of multiculturalism as a set of policy tools to manage the diversity, by, for instance, outlawing the giving of offence in the name of respect and tolerance’, says Kenan Malik.

– In parallel with the increasing immigration many European countries have seen the emergence of populist ,anti- immigration right-wing parties that often have often taken a hard line in defence of free speech. How do you see their role in the debate?

‘It’s not a straightforward issue. One of the reasons rightwing populists have been able to present themselves as defenders of free speech is that the left has largely abandoned the struggle for freedom of expression. But let us be clear that the populist right is no friend of free speech. Take, for example. Geert Wilders, who is currently facing a court case in the Netherlands on charges of hate speech. Wilders promotes himself as a martyr for free speech. But he also calls for the banning of the Qur’an , and for the ending of the construction of mosques in the Netherlands. Wilders is no defender of free speech, but he has been able to present himself as such because liberals and the left are no longer willing to stand up for free speech’

– So the liberals and the left must get back to the fight for freedom of expression if we are to hope to reverse the trend?

The photo of Flemming Rose is by  Sigrid Nygaard/Information; the image of the Danish cartoons shows the issue of Jyllands-Posten in 2005 with the original cartoons, and the reproduction of the page in 2015 on the 10th anniversary of the publication of the cartoons – with the cartoons all removed.