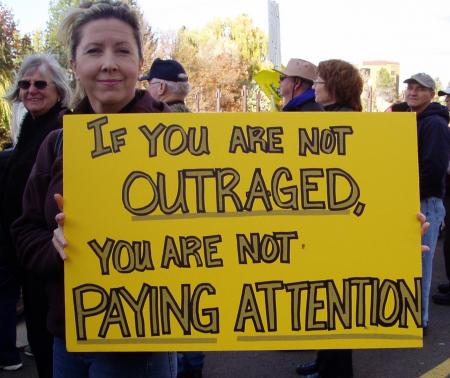 I gave a talk on Wednesday night to the Studienbibliothek in Hamburg. Entitled ‘Left, Right and Islamism’ the talk explored the ways in which the responses of both left and right to Islamism have betrayed of basic principles of freedom and liberty. One of the key themes in the discussion afterwards was about how the liberal fear of giving offence has helped created the space for Islamists to take offence. The more that we worry that people will be offended by a book or a play or a cartoon or an idea or a thought, the more we give licence for people to be so offended, and the more that people will seize the opportunity to feel offended.

It is not just Islamists who live by outrage. Returning to Britain, I discover in the three days I’ve been away three incidents that perfectly illustrate how everyone now wants to feel offended – or rather how the authorities, from the police to trade union bureaucrats, seem to want everyone to feel offended.

First, there was the case of the woman whose racist rant on a Croydon tram went viral after another passenger videoed it on a mobile and posted it on YouTube. The police tracked her down from that video, charged her with ‘racially and religiously aggravated harassment’ and got her remanded in custody. Then came Jeremy Clarkson who made a typically inane joke about public sector workers needing to be shot. UNISON, the public sector union, demanded his sacking and a police investigation. And then Manchester City footballer Micah Richards received some racist backchat on his Twitter feed. @WillMadine94 tweeted: ‘You big fat nigger u r shit. Martin Kelly over u all day for england. Play for africa!!!’. Lincolnshire police launched an investigation (the tweeter is believed to live in the county) and are trying to track him down.

Each of these incidents is different, ranging from poor taste to hateful abuse, and each requires a different response. What none of them requires is for the law to intervene.

Tram woman was nasty and abusive; she is of a kind I have faced many times in my life (though thankfully rarely in recent years). The way to deal with her was as the passengers on the tram actually did: they confronted her and challenged her abuse.

Clarkson should simply have been ignored. He is like the pub bore whose whole aim is to provoke a effect. The more that people rise to the bait, the more they make his day. At least Clarkson had the excuse that he was trying to make joke. UNISON has no such excuse. There is, as David Allen Green pointed out, something more than a little odious about a trade union ‘calling for someone to be summarily sacked. No disciplinary procedure, no due process, no contract rights: the man should be fired immediately.’

@WillMadine94  is one of those foul-mouthed, bigoted trolls that pop up all too frequently on the web (though he seems now to have deleted his Twitter account). Richards, if he had really felt offended, could have blocked @WillMadine94 on his Twitter feed.  Instead, Richards responded: ‘Love the racist abuse keep it coming… ☺.’Hardly the response of someone shattered by the abuse. The police decided to step in anyway.

Outrage these days has become almost a means of defining oneself, of marking out one’s identity. I know who I am because I am outraged by this, you know who you are because you are outraged by that. Muslims, Christians, atheists, liberals, conservatives –  for every group outrage has become an expression of self-definition. The mark of identity is the possession of a thin skin. Monica Ali, whose novel Brick Lane caused umbrage among some Bangladeshis, talked in an interview I did for my book From Fatwa to Jihad, of the creation of a ‘marketplace of outrage’:

Indeed they do. It is a marketplace that is quickly becoming more crowded than a passport queue at Heathrow airport.

The marketplace of outrage is not, however, simply a means of creating self-identity. It is also a means of social regulation. Speech regulation – whether of hate speech or of offensive speech – is becoming a mechanism through which the authorities can police relations between groups in an era of identity politics. in an increasingly tribal society, the slightest whiff of saying something unacceptable has become a matter for social discipline.  It is a kind of society that Islamists revere. What is extraordinary is how many liberals, and those on the left, seem to desire it too. I’m outraged.