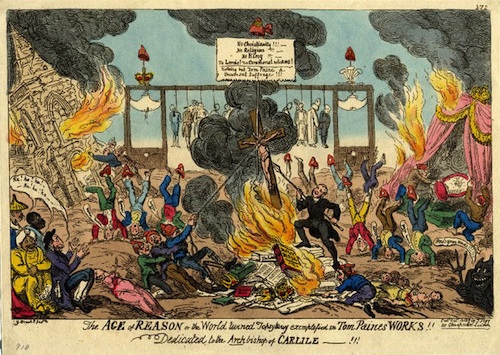 In my talk on pluralism and the giving of offence, I mentioned my 1994 essay on Thomas Paine that had been censored by the Independent because I opened it with a quote from The Satanic Verses. Here is that essay, in the form in which it was finally published. And this is the quote from The Satanic Verses that was felt to be too offensive. It describes the moment that Salman, the scribe who writes down the revelations that Mahound receives from the angel Gibreel, begins to entertain doubts about the nature of those revelations (Mahound is the pejorative name, derived from the Crusaders, that Rushdie gives Muhammad):

Salman the Persian got to wondering what manner of God this was that sounded so much like a businessman. This was when he had the idea that destroyed his faith, because he recalled that of course Mahound himself had been a businessman, and a damned successful one at that… After that Salman began to notice how useful and well timed the angel’s revelations tended to be, so that when the faithful were disputing Mahound’s views on any subject, from the possibility of space travel and the permanence of Hell, the angel would turn up with an answer, and he always supported Mahound, stating beyond any shadow of a doubt that it was impossible that a man should ever walk upon the moon, and being equally positive on the transient nature of damnation.

This essay is both a coda to my talk and a complement to my interview with Jonathan Israel on the Enlightenment, religion, equality and tolerance.

I was going to being this piece with a quote from The Satanic Verses in which Salman Rushdie satirizes the divine origin of the Qur’an. It was felt, however, that this would be too provocative and insensitive. It is ironic that having been commissioned to write a piece on Tom Paine, the greatest freethinker of his age, I am unable to use a quote from a freely available book because it might cause offence to do so. It is a demonstration of the continuing relevance of Tom Paine to contemporary political discussion.

Tom Paine would have approved of Rushdie’s novel. Few authors have so punctured the pretensions of organized religion or savaged the claims of divine revelation as Paine. And fewer still have faced such ridicule and vilification for doing so.

Two hundred years ago today, Paine published part one of The Age of Reason, a book that was to become The Satanic Verses of its day. Paine said of the book that it was a ‘march through Christianity with an axe’. Just as his previous major works, Common Sense and The Rights of Man – a defence of American independence and the French Revolution respectively – laid the axe of reason to the tree of feudal despotism and monarchical corruption, so The Age of Reason laid it to the other prop of national superstition and imposture, the established Church.  ‘All national institutions of churches’, wrote Paine, ‘whether Jewish, Christian or Turkish, appear to be no more than human inventions, set up to terrify and enslave mankind, and monopolize power and profit.’

True belief, argued Paine, derived from the exercise of reason. If the Bible was true, it must be consistent with external evidence and rational argument.  Yet by any measure of reason, the Bible could only be held up to ridicule: ‘Were any girl that is now with child to say that she was gotten with child by a ghost, and that an angel told her so, would she be believed?’ Paine went through the whole of the Scriptures, from the stories of Creation to the Resurrection, demolishing their claims to truth. The Bible, he concluded was not the world of God, but work of man, and moreover one written to maintain power and privilege of the feudal elite. It had no place in a rational, democratic society.

Paine’s polemic created a storm like no other. In England The Age of Reason was suppressed for decades and successive publishers imprisoned for blasphemy. Anyone who distributed, read or discussed the book faced prosecution. Some were arrested for simply displaying the portrait of the author. In America, where hitherto Paine had been fêted as a hero for his unwavering work as a publicist for independence, newspapers denounced him as a ‘lying, drunken, brutal infidel’, ‘a lily-livered sinical rogue’ and ‘a demihuman archbeast’. A century after Paine’s death in 1809, the US President Theodore Roosevelt could still describe him as a ‘filthy little atheist’.

What terrified the authorities was not so much Paine’s arguments (his ideas were already familiar within deist and Unitarian circles) as the popular audience to which he appealed. As in all his writings Paine aimed for a readership of common people, writing in the plain style of ordinary speech and transforming the ideas of the few into the property of the many. The Age of Reason became an assault on the established order, and one that was accessible to the masses. 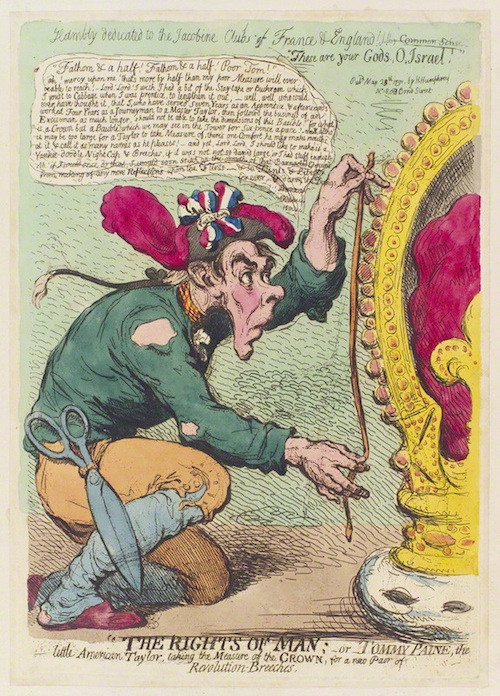 Despite his trenchant critique of Christianity, Paine was no atheist. He was a deist who thought that science itself demonstrated the existence of a God. Since all things must have a cause, he argued, and since the universe could not have created itself, something must have created it. And that something – the ‘First Cause’ – was God. Whatever one makes of Paine’s deism, the attempt to bring reason to the study of religion was an enormous leap forward, flowing as it did out of a desire to outlaw prejudice and unreason.

In the final account, Paine’s greatness – and his relevance for us today – lies less in what he said than in how he said it. Paine had what we would now call attitude. He was intransigent, provocative and cocksure. He mocked authority and deferred to no one. He had no time for custom, no reverence for the past.   Edmund Burke wrote of him that he sought ‘to destroy in six or seven days’ that which ‘all the boasted wisdom of our ancestors has laboured to perfection for six or seven centuries’. To which Paine replied: ‘I am contending for the rights of the living and against their being willed away, and controlled, and contracted for, by the manuscript-assumed authority of the dead’. For Paine the living were fully capable of organizing their lives without any recourse to the dead.

Most of all, Paine had little fear of offending people, particularly in authority. He would have been astounded at the pusillanimity of liberals towards The Satanic Verses affair. Paine would have recognized that much of the anti-Muslim rhetoric was fuelled by racism and would have combated it – he was, after all, the author of African Slavery in America, a fierce polemic against racial inequality. But the idea that we should be any less trenchant in our criticism of religious dogma and superstition of whatever kind for fear of ‘offending’ people would never have occurred to him. Above all, Paine would have been contemptuous of the deference that contemporary journalists and commentators show towards authority and tradition, and of the general disinclination of our age to confront, to provoke, and to question. The central thrust of all his work was to teach the ordinary reader to question all forms of received wisdom  and to demand their right to participate fully in political  life. Would that there were a few more Tom Paines (and many fewer Edmund Burkes) today.

The images are all of cartoons mocking Paine. From top down: George Cruikshank’s ‘The Age of Reason; or the World turned Topsyturvy exemplified in Tom Paine’s Works!!’, now in the British Museum; James Gillray’s engraving ‘Tom Paine’s Nightly Pest’; and Gillray’s ‘Thomas Paine’, now in the National Portrait Gallery in London.