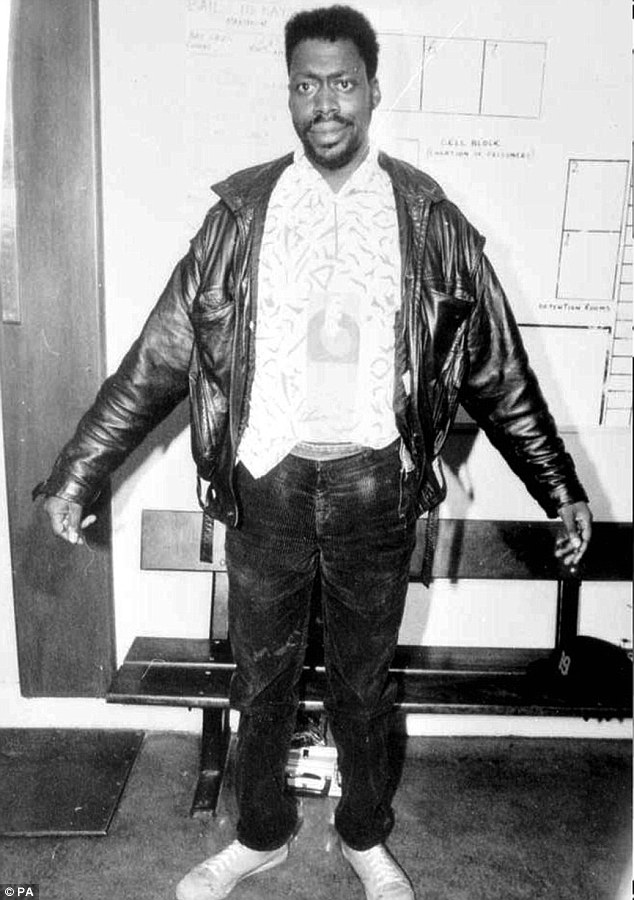 In the Old Bailey in London there is currently a trial that carries with it the aftershocks of the social fractures, institutional injustices and corrupt policing of the 1980s. Nicholas Jacobs is in the dock accused of murdering policeman PC Keith Blakelock, killed during the Broadwater Farm riot of October 1985.  Much has been written during Jacobs’ trial about the agony of the Blackelock family in having to wait three decades for possible justice. Almost entirely ignored has been the injustice done to the men originally imprisoned for Blakelock’s murder. That first Blakelock trial, and treatment of Winston Silcott in particular, was, as I observed in my essay on the contemporary crisis of British policing, emblematic of the racism and corruption that defined Britain’s justice system in the 1980s. And given the silence about it in the discussion of the current trial, it is worth retelling the story.

Broadwater Farm is a sprawling estate in Tottenham, north London, that had long been the focus of tension between the African Carribean community and a police force that constantly stopped, searched, harassed and often framed them. The 1985 riot was among the fiercest of the conflagrations that engulfed Britain’s inner cities in the late 1970s and the 1980s. The immediate spark was the death of a black woman, Cynthia Jarrett, who was pushed over and suffered a heart attack as police searched her house after having arrested her son Floyd for possessing an allegedly suspicious car tax disc. Cynthia Jarrett’s death brought to the surface the years of simmering resentment of the police, the kind of resentment that had already sparked off riots in Brixton, Bristol, Toxteth and elsewhere.  In the midst of the riot PC Blakelock was hacked to death with machetes.

Six men were initially charged with Blakelock’s murder. Three were adults – Winston Silcott, Engin Raghip and Mark Braithwaite. Three were juveniles: 15-year old Mark Pennant, 14-year old Mark Lambie and 13-year-old Jason Hill. The charges against the juvelines were dismissed by the trial judge as they had been detained without access to parents or a lawyer. Hill ‘confessed’ to having taken part in the Blakelock’s murder – and implicated Silcott as the ringleader of the murder gang, and the man who had forced Hill to ‘make his mark’ on Blakelock – only after the 13-year old had been held incommunicado for three days in a police cell naked except for a blanket which, by the time of his police interview was covered in his vomit. In 1991 he told journalist David Rose, author of Climate of Fear: The Murder of PC Blakelock and the Case of the Tottenham Three,the definitive account of the Blakelock trial, that the police had threatened to keep him in the station for two weeks, and told him he would never see his family. ‘They could have told me it was Prince Charles [that killed PC Blakelock] and I would have said it was him’, he said.  Hill’s story ‘screamed fantasy’, observed the trial  judge.

In fact, of the 359 people arrested in connection with the killing, just 94 were interviewed in the presence of a lawyer.  The police and the prosecution both defended these tactics. Detective Chief Superintendent Graham Melvin, the man in charge of the investigation, told the court that ‘the integrity of some firms of solicitors left a lot to be desired’. According to the chief prosecutor, Roy Amlot QC, the police had one effective weapon, namely that suspects did not know who else they had spoken to or what they had said, and that ‘the use of that weapon by the police was legitimate and effective’.

In truth, the police treated suspects as they did because they had no evidence against the accused. There were no eyewitness accounts, nor any forensic  material.  Not a single photo from the more than a thousand taken by the police that night showed any of the six accused in the area. So the police had to obtain confessions through whatever means possible.

In the case of Winston Silcott there was not even a confession. On the third day of his police interview, however, the police claimed that Silcott had boasted that the authorities would never be able to convict him. According to the police account, when asked whether he had attacked Blakelock with a machete and forced others to cut him, Silcott responded:

Who told you that? They’re only kids. No one’s going to believe them… you ain’t got enough evidence. Those kids will never go to court. You wait and see. No one else will talk to you. You can’t keep me away from them… they won’t give evidence against me.

On those words, and those words alone, Silcott was sentenced to life imprisonment for murder. Silcott was, said the judge, a ‘very vicious and evil man’ who had to serve at least 30 years behind bars.

Three years after the trial new forensic tests revealed that even Silcott’s words of non-admission had been fabricated by the police. The pages containing the ‘admission’  had been inserted some time after the rest of the notes were written, even though all the notes were supposedly contemporaneous. Indeed the paper on which the admission had been written had come from a different batch to the rest of the police interview notes.

Why, given that on any rational view there existed no credible evidence – indeed no evidence at all – against Silcott, did the jury convict? Because Silcott had already been set up by the police and media as the ‘Beast of Broadwater Farm’. ‘The press, not just the tabloids, created a monster to stalk the nightmares of Middle England’, as BBC journalist Kurt Barling was later to put it.

Not just the press but the police and prosecution, too, painted a picture of a monster loose on society, the ringleader of a savage mob which had planned to sever Blakelock’s head and mount it on a pole like a medieval trophy.. ‘Atavistic racial imagery lay close to the surface’ of the prosecution case observed David Rose. Police claimed that Silcott had brandished a machete, dripping with blood, and proclaimed to cheers: ‘This is bullman’s blood.’ He had, they claimed, thrust a sword into the hands of a 13-year-old  Jason Hill, and forced him, on pain of death, to slash Blakelock’s prostrate form to ‘make my mark’ and then told him: ‘You cool, man.’

At the time of the Broadwater Farm trial, Silcott was on bail for the murder of another man, boxer Anthony Smith. Silcott has always pleaded to self-defence. But the fact that he was on bail for another murder made it easier for the police and press to paint him as a natural-born killer. ‘Over the years I’ve often asked, “Why me?”‘ Silcott observes. ‘Sure I’d had my share of beefs with the cops, but so did a lot of black guys in the Eighties. The answer is that they knew they could get away with it. It was very easy for them to make me a target, much easier than it would have been with anyone else, because I was out on bail for murder. They knew they could fabricate anything they liked because the other murder case would come into the arena. That was the reason they could be so bold and so brazen.’

Even after his conviction was quashed, the police and the press continued to treat him as the killer. The Police Federation  claimed that he had got away on a technicality – as if the fabrication of evidence, and the complete lack of evidence, is a ‘technicality’. Even as late as 2007, the Sun wrote of Silcott: ‘KILLER Winston Silcott has returned to walk the streets just a mile from the spot where PC Keith Blakelock was hacked to death.’

A witness at the trial of Nicholas Jacobs suggested that all black people looked the same to him:

That was how black people looked to the police, too, in 1985, and any (and every) black person was a potential criminal, suspect and fit-up. ‘They created something out of nothing’, Winston Silcott observed in an interview. ‘Winston Silcott, the monster, the beast of Broadwater Farm. And still they won’t let this creation lie down and die. The system conspires to uphold itself. They should have done things properly in the first place, but they still don’t want to take any blame.’

Any unreferenced quote comes from David Rose’s book Climate of Fear: The Murder of PC Blakelock and the Case of the Tottenham Three.