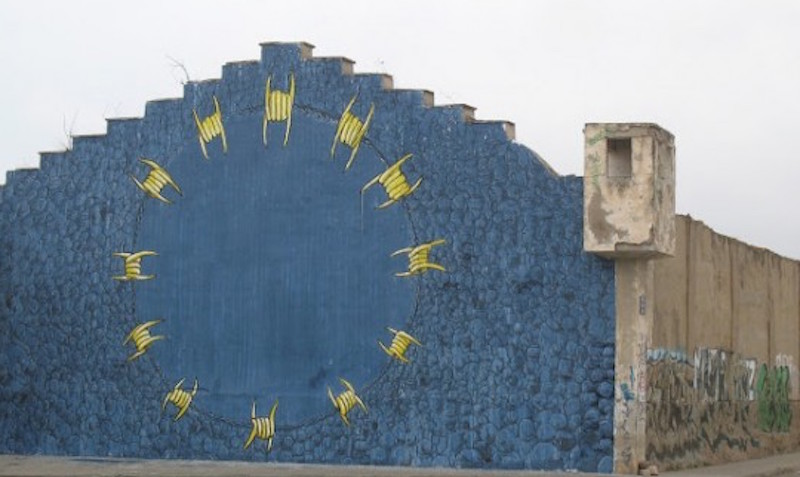 This is the full version of my article on the Mediterranean migrant tragedy, first published in the New York Times last month, at the start of the current crisis, under the headline ‘Migrants face Fortress Europe’s deadly moat’. ( I cannot publish my New York Times articles on Pandaemonium until the following month.)

Up to 1,200 people are believed to have died this past week when, in several incidents, their flimsy boats foundered in the Mediterranean. These migrants from Syria, Mali, Eritrea, Somalia and beyond had set out from North Africa hoping to reach Europe’s southern shores. Fleeing war and poverty, most had paid large sums to traffickers.

The scale of the tragedies is shocking. But it is nothing new. It is estimated that since 1993, some 20,000 migrants have died trying to cross Europe’s southern borders. The true figure is undoubtedly higher: thousands will have perished, their deaths unrecorded.

Who is to blame? European politicians point the finger at traffickers. European Union officials have come up with a 10-point plan, at the heart of which was military action to destroy smugglers’ networks.

The traffickers are certainly odious figures, recklessly placing migrants in peril. But what pushes migrants into the hands of traffickers are the European Union’s own policies. The EU’s approach to immigration has been to treat it as a matter not of human need, but of criminality. It has developed a three-pronged strategy of militarizing border controls, criminalizing migration and outsourcing controls.

For more than three decades, the European Union has been constructing what critics justly call ‘Fortress Europe’, a cordon protected by sea, air and land patrols, and a high-tech surveillance system of satellites and drones. When a journalist from Germany’s Der Spiegel magazine visited the control room of Frontex, the European border agency, he observed that the language used was that of ‘defending Europe against an enemy’.

The decision last year to scrap Mare Nostrum, the Italian-run search-and-rescue program, highlights this strategy. Mare Nostrum was replaced by Operation Triton, smaller in scope and with an entirely different aim — not saving lives but surveillance and border protection. The number of migrants now attempting to reach Europe is little different from that for the same period last year. The death toll has leapt 30-fold.

When the European Union treats immigration as a problem of criminality, it is not just the traffickers who are targets. In 2004, a German ship, the Cap Anamur, rescued 37 African refugees, sick and freezing,  from a rubber dinghy. When the ship entered a Sicilian port, it was seized by the authorities who charged the captain and first officer with aiding illegal immigration. They were acquitted only after a five-year court battle.

Similarly, in 2007, the Italian authorities tried to block two Tunisian fishing boats that had rescued 44 stranded migrants from docking at Lampedusa, an island between Sicily and Tunisia. The captains were charged with assisting illegal immigration and violent resistance. Not until 2011 did an appeals court overturn all the convictions.

Such cases are not aberrations. Treating good Samaritans as common criminals is the inevitable consequence of the European Union’s immigration policy.

The third prong of the strategy is to outsource border controls by paying African states to detain potential migrants. The most notorious of these arrangements was with Libya. In 2010, a year before Britain and France launched airstrikes to help bring down Libya’s leader, Col. Muammar Gaddafi, the European Union concluded a deal with him, agreeing to pay 50 million euros over three years to turn his security forces into de facto border police. Even before they gained power, the anti-Gaddafi rebels agreed to continue the arrangement.

The European Union has a similar deal with Morocco, and hopes to recruit Egypt and Tunisia, too. In effect, it aims to relocate Europe’s borders to North Africa.

The 10-point plan that the European authorities have proposed is in keeping with this approach. Proposals include strengthening surveillance mechanisms, deploying immigration officers ‘in key third countries, to gather intelligence’ and a ‘programme for rapid return of irregular migrants’.

Most eye-catching is the promise to destroy smugglers’ boats. Not only is this morally dubious — effectively telling migrants ‘We will wall you into North Africa so that you’re not our problem’ — but it also won’t work. One reason for the spike in migrant numbers is the collapse of state authority in the region, and the subsequent unleashing of chaos and conflict. Western intervention, Iraq and Libya in particular, has helped exacerbate this. The EU’s proposed military action will only intensify the turmoil.

At the same time, migrants are forced to clamber into overloaded, unseaworthy boats because most legal routes into Europe have been blocked off. Destroying boats will not stop people from trying to reach Europe. It will merely force them to adopt even more perilous means of doing so.

So, what is to be done? The restoration of a proper search-and-rescue operation is important but insufficient. The European Union should stop treating migrants as criminals, and border control as warfare. It needs to dismantle Fortress Europe, liberalize immigration policy and open up legal routes for migrants. Supporters of Fortress Europe argue this would lead to a flood of immigrants, but current policy is not preventing people from migrating; it is simply killing them, by the boatload.

Fortress Europe has created not just a physical barrier around the Continent but an emotional barricade around Europe’s sense of humanity, too. Until that changes, the Mediterranean will continue to be a migrants’ graveyard. Come the next tragedy – and there will be one – politicians across Europe will wring their hands in horror. When they do, remember this: those same politicians could have helped prevent it, but chose not to.

The top image is of a wall painting in Morocco by the Italian artist Blu; the other image is by Arianna Vairo from the New York Times.