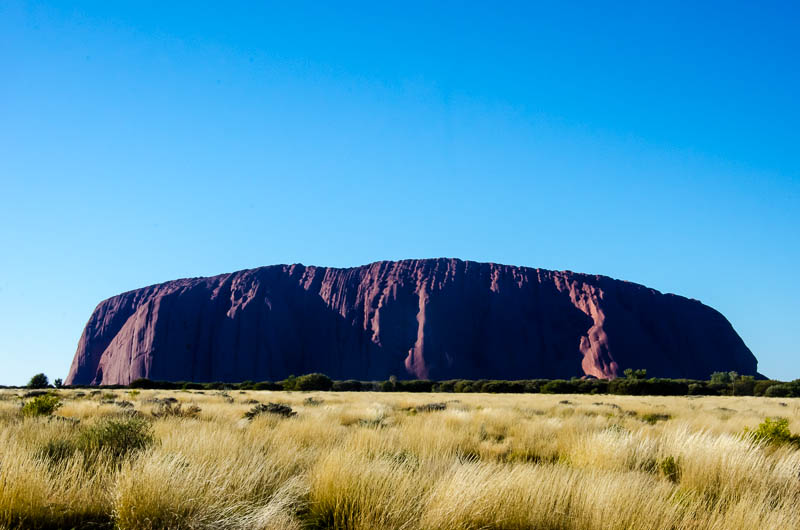 Nothing quite prepares you for your first sight of Uluru. Amid the vastness of the arid landscape of Australia’s red centre, fringed by ill-shapen hills and mountain ranges, there is something wondrous and almost magical about this monumental slab of sandstone, most of which actually lies beneath the ground. The monolith was created more than 500 million years ago, and is a remnant of a vast mountain range formed during the creation of the Australian continent. Much of the surrounding land has been eroded away, leaving a series of ‘inselbergs’, the geological term for isolated monoliths that rise abruptly from lowlands that have been eroded flat.

Uluru is not beautiful in a conventional sense – though it is visually striking – but it exudes a sense of power and majesty and timelessness. It is not difficult to see why Indigenous Australians saw – and many still see – it as a place of spiritual significance.

Uluru is not, however, just a place of wonder and reverence. It is also deeply infused with politics and history, a place through which Australia has tried to grapple with many of its deepest and most troubling issues, with its identity as a nation and, in particular, with its relationship to Indigenous Australians.

Uluru has become one of Australia’s most resonant images, challenged for its salience as a national icon only by the Sydney Opera House. But this view of Uluru as in some sense representing the nation is relatively new. ‘Uluru’ is the name given to the monolith by the Anangu, the original Indigenous inhabitants of the region. For more than a century, Uluru was known to Australians of European descent, and to most outsiders, as ‘Ayers Rock’, named by the nineteenth century  surveyor Wiliiam Gosse in honour of the then Chief Secretary of South Australia, Sir Henry Ayers.

In 1920, the Australian government declared a part of what was eventually to become the Uluṟu–Kata Tjuṯa National Park an Aboriginal Reserve. Sixtty-five years later, in 1985, as part of the process of attempting a kind of reconciliation with Indigenous Australians who had through the colonial period been brutally dispossessed of their lands, Canberra returned ownership of Uluru to the local Pitjantjatjara people (part of the Anangu nation), on condition that it would be leased back to the Australian National Parks and Wildlife Service for 99 years, and be jointly managed. It was at the time a controversial decision, leading to protests both from white Australians, some of whom considered it unnecessary to return the land to the Pitjantjatjara, and from Indigenous people, many of whom thought it insufficient restitution. Uluru has come to symbolise the struggle for Indigenous rights and for the meaning Australian identity.

I will write more fully on some of these issues but, in the meantime, some photos, both of Uluru and of Kata Tjuta, a striking rock formation comprising some 36 domes (Kata Tjuta means ‘many heads’ in the Pitjantjatjara language). Some 50 km from Uluru, it was created at the same time and in much the same way (though it is composed not simply of sandstone but of conglomerate, a sedimentary rock made up of various rock types including granite and basalt cemented by a sandstone matrix.)

The photos of Uluru were taken at first light, sunrise and sunset, and from different perspectives. The first light photos were take from the west, with the light behind the rock, the sunrise photos from the east with sunlight falling on Uluru, and the sunset photos from both sides. The Kata Tjuta photos were taken either at a distance from Uluru (at sunrise and sunset) or close up from within the range, mainly from the Valley of the Winds. 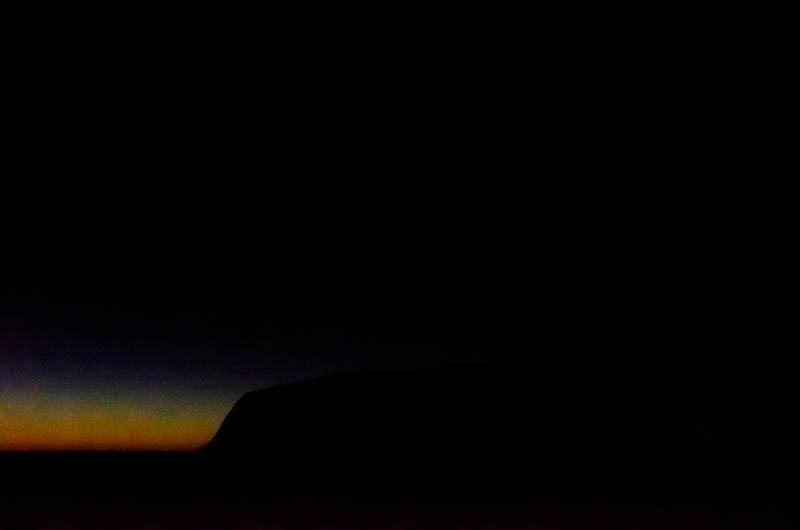 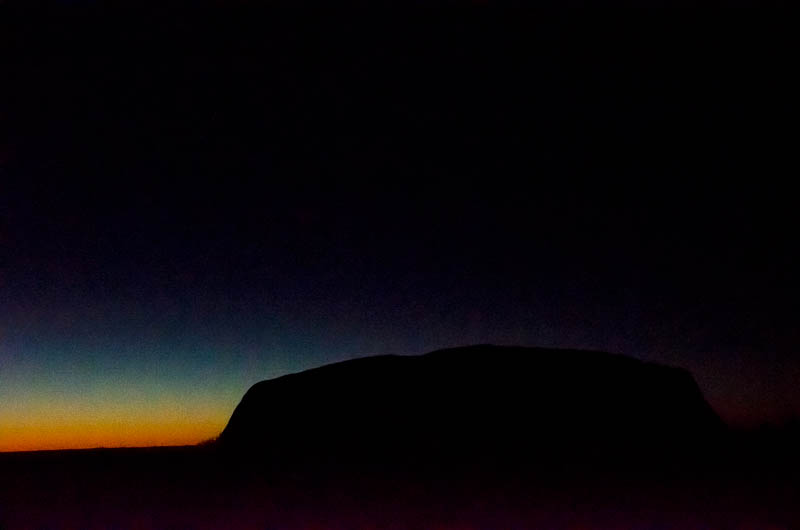 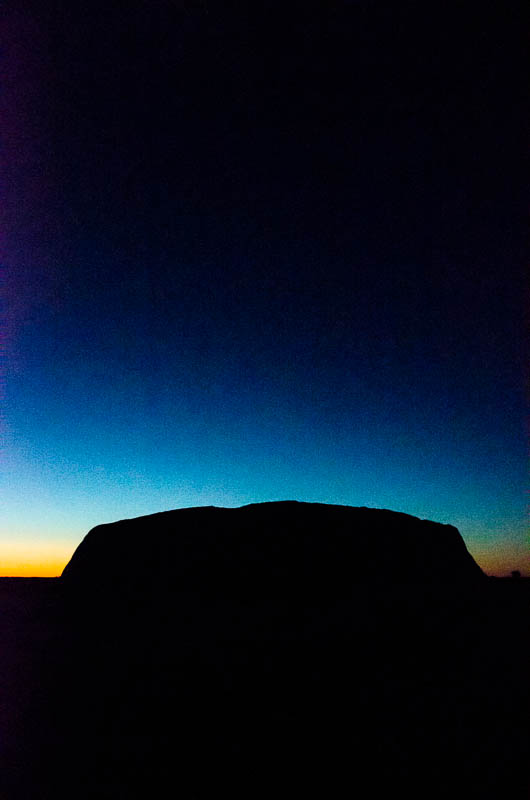 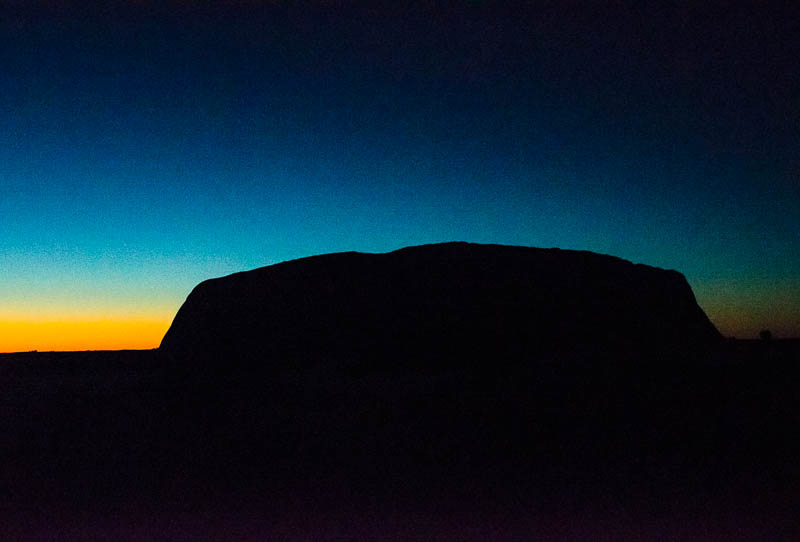 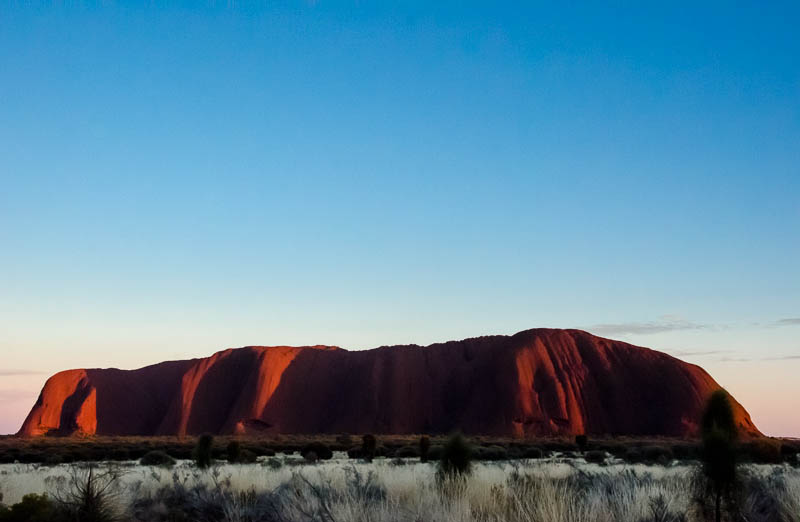 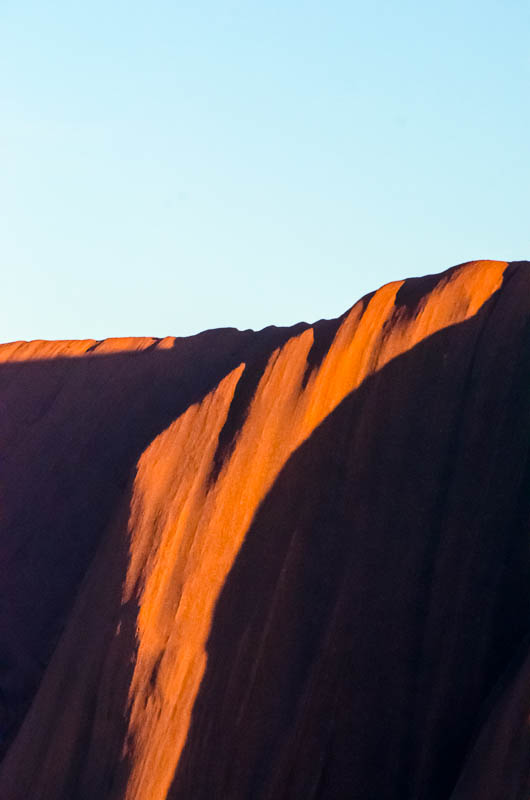 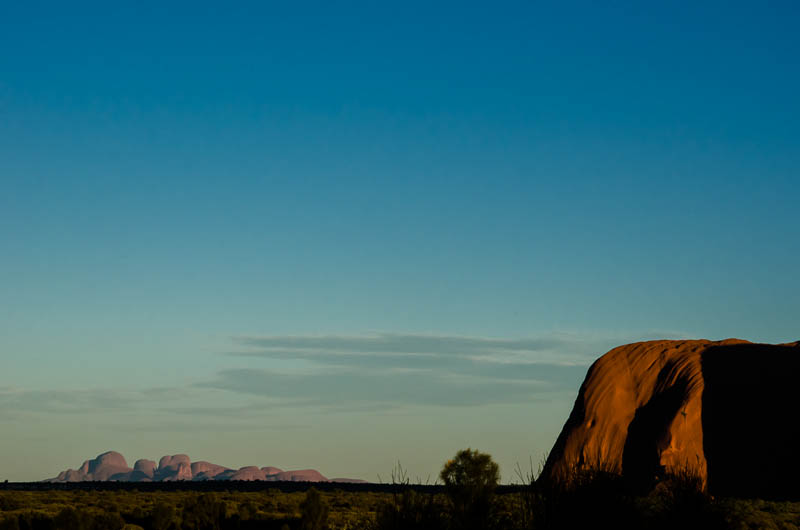 Kata Tjuta, far and near 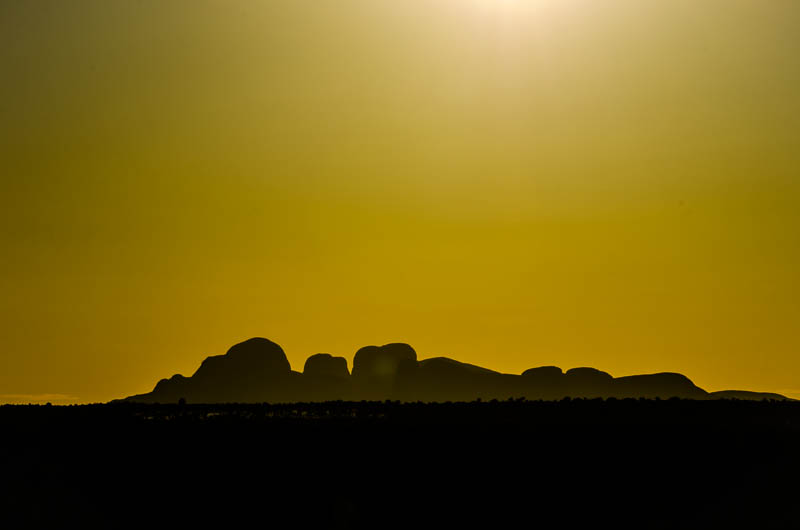 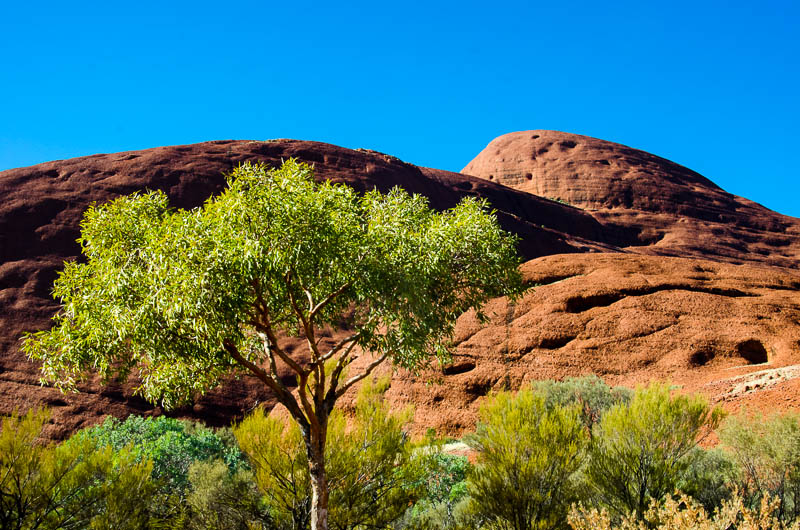 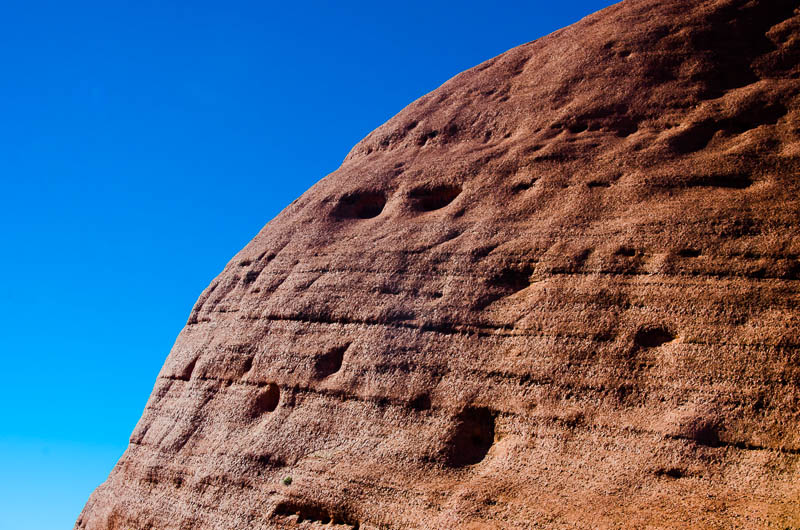 At the fading of the light 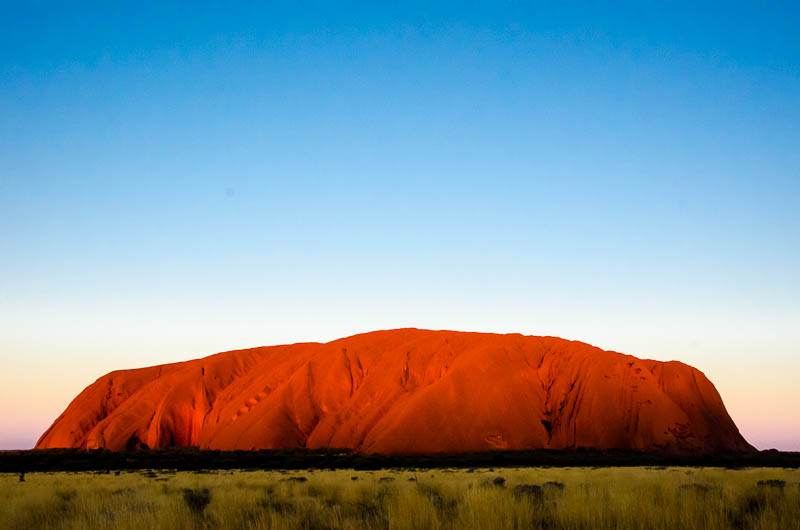 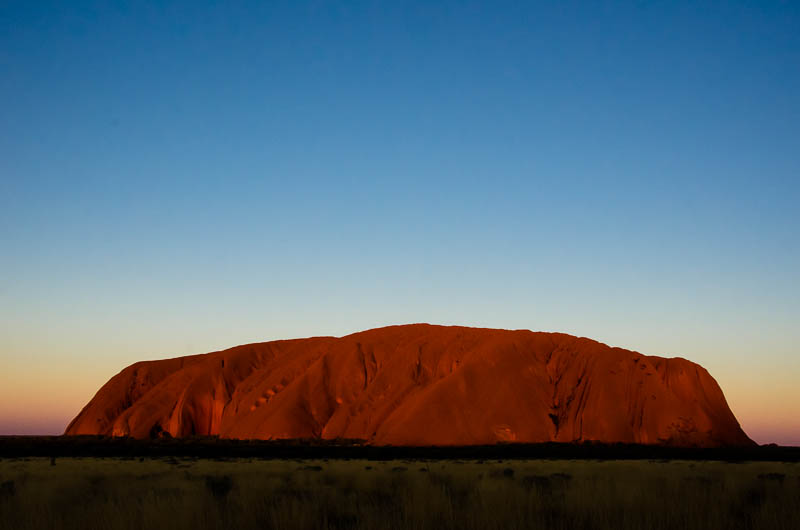 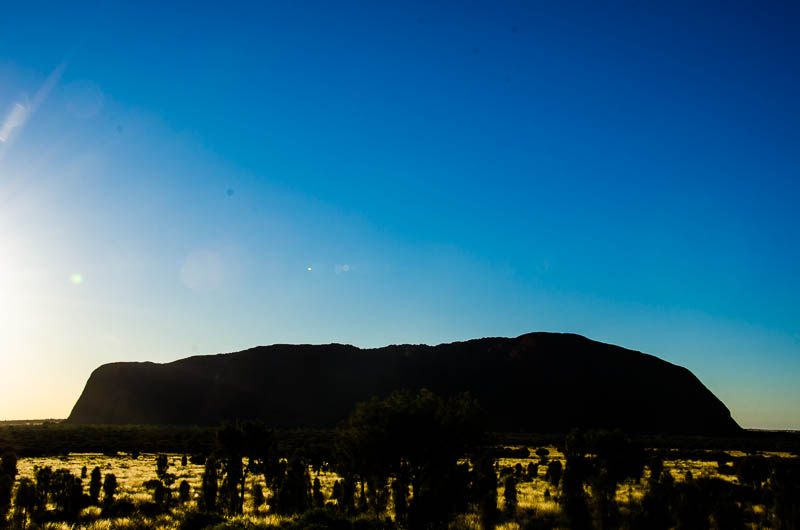 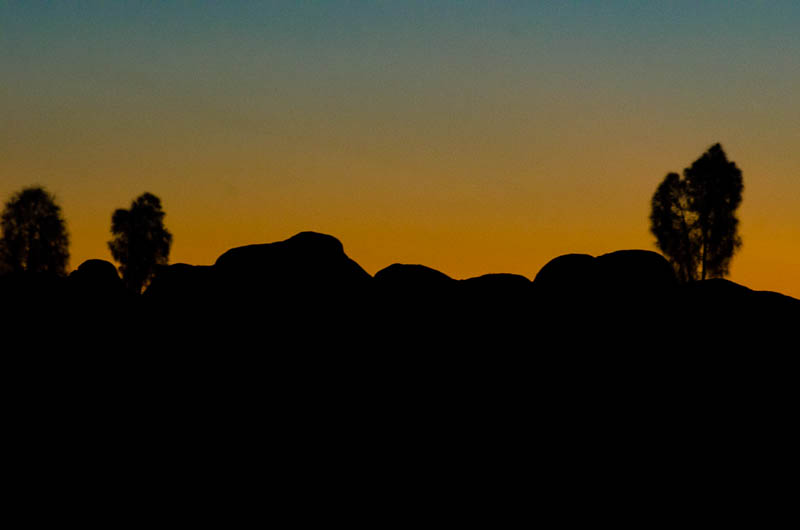