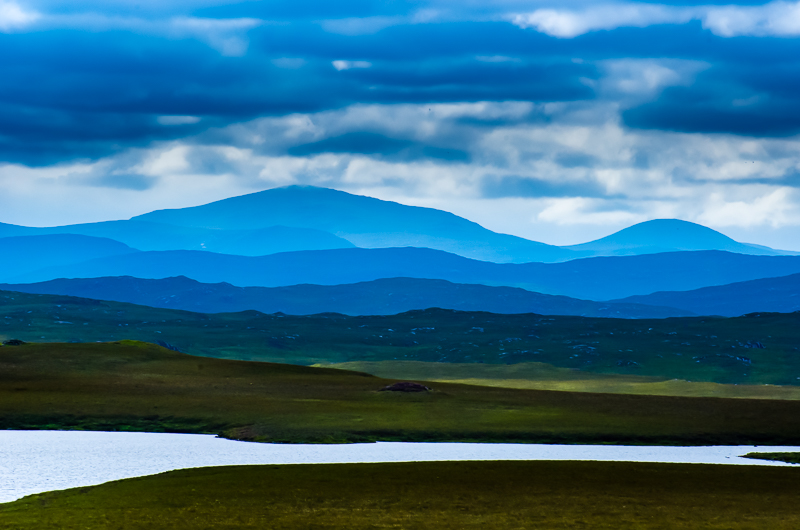 This essay, on humanity’s entangled relationship with the ‘wild’, was my Observer column this week. (The column included also a short piece on race, class and diversity.) It was published on 18 August 2019, under the headline ‘Last week, I gazed on a truly wild land… and saw art reflected back’.

Achmore is a nondescript hamlet on the A858 that cuts across the isle of Lewis and Harris in the Outer Hebrides. This is a gnarled, fractured landscape, swaddled in wind and rain, and built out of some of the oldest rocks on Earth – Lewisian gneiss, the bedrock of the island, is some 3bn years old, two-thirds the age of Earth itself.

We had gone to Achmore to search out an ancient stone circle. There are dozens of these, including the most famous one at Calanais, scattered across Lewis’s melancholic moorland. The Achmore stone circle was disappointing, with little to catch the eye. But then we turned to look south. And almost gasped. For Lewis’s forbidding landscape, caught in a delicate light suffused through the late-afternoon cloud, had been transformed, becoming draped in an ethereal, almost unreal, beauty. Dozens of lochans – small lochs – dappled the foreground. Behind them, where the hills of Harris rose, were layer upon soft layer of pastel colours, from gold through green to blue, laid like chiffon scarves across the horizon.

I love bleakness. Not as a human condition but as a physical landscape. Not for me the well-tended orchards of Kent or the Constable-painted loveliness of the Stour valley. Give me, rather, the menace of Dartmoor, the strangeness of Orford Ness on the Suffolk coast, the emptiness of Ranoch Moor in the Scottish Highlands and most of all the dark, brooding allure of the Western Isles of the Outer Hebrides and the Northern Isles of Orkney and the Shetlands. These are all places that can be desolate, even hostile. Yet they are also landscapes imbued with beauty, even grace, such as that moorland in Lewis.

As a human condition, bleakness suggests that one is in a place empty of joy or hope. Much of the landscape that we call bleak is bleak in a different way – because it isn’t manicured or domesticated. There is a wildness about it by which we can be discomfited and yet often also celebrate and romanticise.

In his book The Wild Places, Robert Macfarlane, one of the most expressive nature writers of our time, observes that throughout history there have been two broad responses to wildness. On the one hand, it is perceived as ‘a dangerous force that confounds the order-bringing pursuits of human culture and agriculture’. On the other is a perception of wildness ‘as an energy both exemplary and exquisite, and of wild places as realms of miracle, diversity and abundance’. Wildness as a threat and wildness as a refuge.

Neither perspective, though, captures humanity’s complex, entangled relationship with the wild. Human societies have in large part been carved out in defiance of nature. From the houses we build to shelter us from the elements to the medicines we develop to protect us from pathogens, from the piped water without which millions still die from diarrhoea and other illnesses, to the weather stations that provide warnings of hurricanes and heat waves, we are constantly in a struggle to shield ourselves from nature’s furies. There is a rational root to the fear of the wild and of the threat that it can pose.

At the same time, the eulogisation of nature, and a yearning for a wilderness that has been lost or despoiled, is inextricably human. There are many threads to such a yen. For some, the depredations caused by human activity, from river pollution to global warming, outweigh the benefits. Along with human development has developed a disdain of progress and civilisation. For others, modernity and urbanisation have brought with them a spiritual loss, a severing of our elemental ties with nature.

Whatever the roots, wildness does not simply lie ‘out there’, but inside, in the human imagination. We project upon the wild the fears and hopes, the emotions and passions, nurtured by history and culture and community. It is through culture and imagination that we imbue the wild with meaning.

And what we call ‘wild’ is often humanly created, physically too. The moorlands of Lewis, for instance, are bleak not just because of its natural features but also because of human activity and social policy. From ancient tree-felling to modern land clearances, humans have long shaped the landscape.

The beauty of the Western Isles and the Northern Isles is remarkable, their wildness and bleakness something to be treasured. But when I look upon them, what I see is coloured by far more than the landscape itself. It is a landscape created in the novels of George Mackay Brown, the poetry of Kevin MacNeil, the paintings of Wendy Sutherland, the photography of Rebecca Marr, the writings of Macfarlane. That, too, is remarkable and something to be treasured.

The photo is mine, and is of the view south from Achmore.