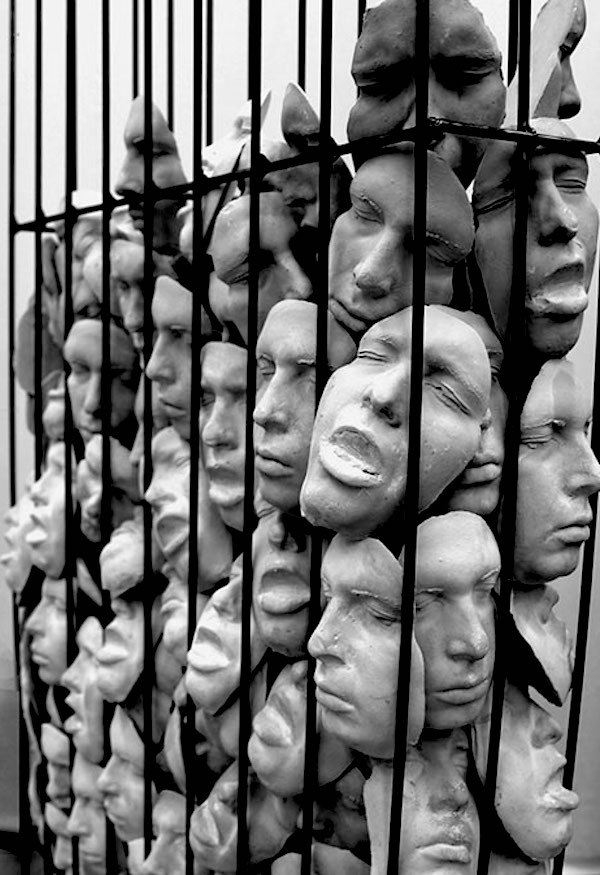 This essay, on EU border control policy, was my Observer column this week. (The column included also a short piece on free speech at universities.) It was published on 8 March 2020, under the headline ‘Detention, torture and killing … how the EU outsourced migration policy’.

‘But what else can we do?’ So asked many people after a video emerged of Greek border guards attempting to capsize a small rubber dinghy full of migrants, and firing shots towards it. The incident occurred after Turkey’s President Recep Tayyip Erdoğan opened the borders in a cynical attempt to blackmail the European Union into supporting the Turkish military offensive in Syria.

Many were shocked by the actions of the border guards. But many also insisted that it was a necessary response. EU leaders expressed their ‘solidarity’ with Greece, describing it as Europe’s ‘shield’.

However shocking the video, there is nothing unusual in such treatment of migrants. There is a long history of Libyan coastguards, paid and trained by the EU, shooting at migrants.

A leaked EU internal memorandum acknowledged last year that capturing migrants was now ‘a profitable business model’ in Libya. Many militias and people smugglers call themselves coastguards to claim EU money by ‘arbitrarily detaining migrants’. According to Amnesty International, about 20,000 migrants are held captive by the government, militias and criminal gangs, many subject to torture and abuse, practices in which European governments ‘are complicit’.

It’s not just in Libya. The EU has created a huge kidnap-and-detention industry throughout north Africa, the Sahel and the Horn of Africa. It has made deals with the likes of Omar al-Bashir, the former leader of Sudan indicted by the international criminal court for war crimes. The Janjaweed, a militia that pursued almost genocidal violence in Darfur, now calls itself the Rapid Support Forces and hunts down migrants for the EU rather than rebels for Bashir.

Nobody knows how many migrants have been killed by EU-funded forces. Of those who have escaped their clutches, at least 20,000 people have drowned in the Mediterranean in the past six years alone.

In asking, ‘But what else can we do?’, we are really asking, ‘But what else can we do except mass detention, torture and killing?’ How about making our starting point a refusal to detain, torture and kill? That might seem an obvious stance from which no decent human being could abstain. But simply to do that is to undermine the very foundations of the Fortress Europe strategy. That’s how morally warped EU policy is.

Then, we need to think about how to win the argument for more liberal immigration policies. There can be no liberalisation without popular support. The central dilemma today is that no moral immigration policy is likely to win a democratic mandate, and any policy that has popular support is likely to be immoral. It’s not that European populations are drawn to immoral policies; it’s rather that the way immigration has been framed by politicians and commentators, presenting migrants as invaders, and the policies they have pursued, inevitably generates hostility. Take Greece. In 2015, there was much sympathy for arriving migrants. Residents of Lesbos, the island closest to Turkey, and which now hosts the Moria detention camp, provided arrivals with much help, including food and clothing. The failures of EU policy have transformed attitudes.

Greece might be an EU state but it has been treated by Brussels as Libya or Niger have been treated, as part of Europe’s borderlands, a giant prison camp in which to leave migrants to rot so they don’t become a problem for the ‘core’ EU nations. The EU, says Spyros Galinos, until last year the mayor of Lesbos, has ‘left us defenceless and alone’. The result is that ‘kindness has turned to anger’.

On an island like Lesbos, the numbers of migrants held in detention in the most appalling conditions are huge, and rightly creates rage among both detainees and residents. But if Europe were to take collective responsibility, the numbers are relatively small.

With the exception of 2015 and 2016, which were unusual years driven by events in Syria, the number of undocumented migrants to Europe every year has usually been less than that of documented migrants coming just to Britain. The real problem is not the numbers but policies that create huge bottlenecks, appalling conditions for both locals and migrants, and project an image of a continent under siege.

More liberal policies will mean higher migrant numbers. That’s why many dismiss liberalisation as utopian, and insist that what Europe needs are tighter controls. Those who take such a view need to be honest about their argument. Instead of hiding behind euphemisms such as ‘border controls’ or ‘shield’, they should openly say: ‘I’m happy to accept mass detention, torture and killing as a price worth paying for keeping undocumented migrants out.’ For that is the essence of Fortress Europe.

The image is ‘Repression’ by Max Perone, from the Etobicoke School of the Arts, Ontario, Canada, shortlisted for the 2016 Saatchi Gallery/Deutsche Bank Art prize for Schools