My book on the history of moral thought is all but complete (yay!). Hopefully,  blogging will be back to normal next week. In the meantime, here is another old book review plucked from the vaults, this one of Christopher Caldwell’s Reflections on a Revolution in Europe. It was first published in New Humanist in July 2009. For more discussion of the myths about immigration, multiculturalism and Islam, see my Milton K Wong lecture, which is in two parts.

In his classic 1920 book The Rising Tide of Color Against White World Supremacy, the American historian, political theorist and anti-immigration activist Theodore Lothrop Stoddard warned of the coming collapse of white civilization under a ‘swarm’ of ‘colored’ people. Whites had already been driven out of their ancestral homeland in the Caucasus. The land ‘which in the dawn of history was predominantly white man’s country, is today racially brown man’s land in which white blood survives only as vestigial traces of vanishing significance’. And ‘If this portion of Asia, the former seat of mighty white empires and possibly the very homeland of the white race itself, should have so entirely changed its ethnic character’, Stoddard asked, ‘what assurance can the most impressive political panorama give us that the present world order may not swiftly and utterly pass away?’

Stoddard was worried, too, by the prospect of a resurgent Islam. ‘In so far as he is Christianized, the negro’s savage instincts will be restrained and he will be predisposed to acquiesce in white tutelage’, he wrote. ‘In so far as he is Islamized, the negro’s warlike propensities will be inflamed, and he will be used as the tool of Arab Pan-Islamism seeking to drive the white man from Africa and make the continent its very own.’ To protect Europe and America from a similar fate, Western nations had to ensure that ‘the rising tide of color finds itself walled in by white dikes debarring it from many a promised land which it would fain deluge with its dusky waves.’

A century on, Stoddard’s talk of ‘dusky waves’, ‘brown man’s land’ and ‘white blood’ would seem to most people to be insufferably racist. His underlying theme, however – the danger of Europe being overwhelmed by waves of immigration – has come to be seen these days as an expression almost of common sense. But whereas Stoddard saw his book as a rallying cry to build the dikes necessary to keep out the dusky waves, today’s Cassandras fear it is already too late. The tide of color has already come in. ‘In no country in Europe’, Christopher Caldwell writes, ‘does the bulk of the population aspire to live in a bazaar of world cultures. Yet all European countries are coming to the wrenching realization that they have somehow, without anyone’s actively choosing it, turned into such bazaars.’

Caldwell is a columnist for the Financial Times and an editor of the conservative American magazine the Weekly Standard. Reflections on the Revolution in Europe is the latest in a succession of books by authors such as Mark Steyn, Oriana Fallaci, Bruce Bawer and Melanie Phillips warning of how immigration, and in particular Muslim immigration, is threatening the very foundations of European civilization. The melodramatic title of Caldwell’s book is a nod to Edmund Burke and reflects his belief that the impact on European of postwar immigration has been as dramatic as the fall of the ancien regime in 1789. 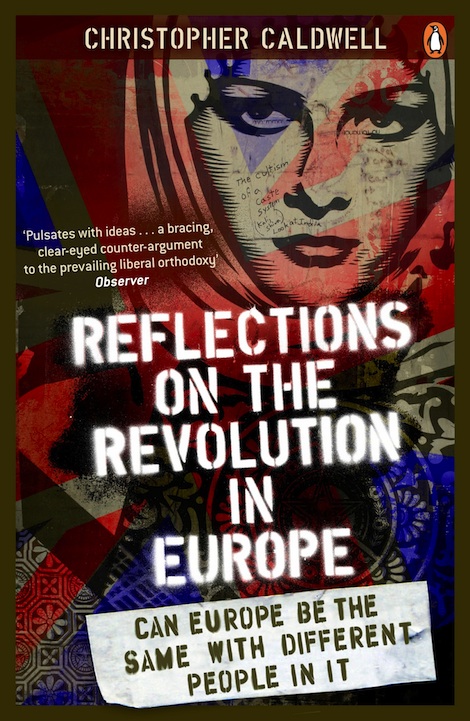 What is different about Caldwell is the high praise garnered by his book not simply from right-wing critics of immigration but from many liberals too – there were laudatory reviews in both the Guardian and the Observer. Caldwell, as Prospect editor David Goodhart has put it, ‘is a bracing, clear-eyed analyst of European pieties’.

But is he? Three basic arguments underly Caldwell’s thesis. First, postwar immigration to Europe has, he believes, been fundamentally different to previous waves of immigration. Prior to the Second World War, immigrants came almost exclusively from other European nations, and so were easily assimilable. Indeed, ‘using the word immigration to describe intra-European movements makes only slightly more sense than describing a New Yorker as an “immigrant” to California’. The cultural apartness of postwar immigrants, on the other hand, has not just posed problems of assimilation but also undermined the very fabric of European societies. Take away colonial guilt, Caldwell suggests, and ‘the fundamental difference between colonization and labor migration ceases to be obvious’.

Second, Caldwell argues that Muslim migration in particularly has been akin to a form of colonization. ‘Since its arrival half a century ago’, Caldwell suggests, ‘Islam has broken – or required adjustments to, or rearguard defences of – a good many of the European customs, received ideas and state structures with which it has come in contact.’ Islam ‘is not enhancing or validating European culture; it is supplanting it’.

And third, Caldwell suggests that Islam’s success has been made easier by a crisis of identity of identity in the West. Europeans, in particular, ‘are coming to despise their own cultures, much as the bigots among their forebears had despised the cultures of other peoples.’ Immigration, Caldwell points out, ‘enhances strong countries and cultures but it can overwhelm weak ones’ – and that is what is happening to Europe.

Reflections on the Revolution in Europe is trenchantly written and robustly argued. It is complex and often subtle. It is also fundamentally wrong in both premise and conclusion.

According to Caldwell, prewar immigration between European nations was different from postwar immigration from outside Europe because ‘immigration from neighboring countries does not provoke the most worrisome immigration questions, such as “How well will they fit in?” “Is assimilation what they want?” and, most of all, “Where are their true loyalties?”.’ In fact, those were the very questions asked of European migrants in the prewar years.

In the 1930s, nearly a third of the French population were immigrants, mostly from Southern Europe. Today we think of Italian or Portuguese migrants as culturally similar to their French hosts. Seventy years ago they were viewed as aliens, given to crime and violence, and unlikely to assimilate into French society. ‘The notion of the easy assimilation of past European immigrants’, the historian of French immigration Max Silverman has written, ‘is a myth’. 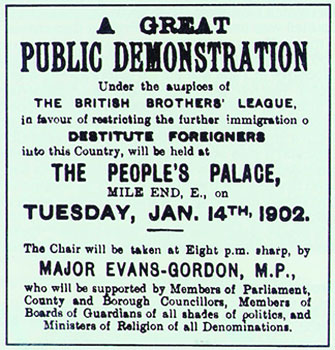 In Britain, the 1903 Royal Commission on Alien Immigration expressed fears that newcomers were inclined to live ‘according to their traditions, usages and customs’ and newspapers worried that there might be ‘grafted onto the English stock… the debilitated sickly and vicious products of Europe’. Britain’s first immigration law, the 1905 Aliens Act, was designed primarily to bar European Jews, who were seen as unBritish. The Prime Minister, Arthur Balfour, observed during the second reading of the Bill that without such a law, ‘though the Briton of the future may have the same laws, the same institutions and constitution… nationality would not be the same and would not be the nationality we would desire to be our heirs through the ages yet to come.’ One of the consequences of postwar migration has been to create historical amnesia about prewar attitudes.

What of the claim that Islam poses a fundamental threat to Western values? Caldwell draws here on the ‘clash of civilizations’ thesis developed by the political scientist Samuel Huntington. The conflicts that have convulsed Europe over the past centuries, Huntington wrote in a famous 1993 essay, from the wars of religion between Protestants and Catholics to the Cold War, were all ‘conflicts within Western civilization’. The ‘battle lines of the future’, on the other hand, would be between civilizations. And the most deep-set of these would be between the Christian West and the Islamic East, a ‘far more fundamental’ struggle than any war unleashed by ‘differences among political ideologies and political regimes’.

Yet, even as he goes along with this idea, Caldwell reveals its inadequacies. ‘What secular Europeans call “Islam”’, he points out, ‘is a set of values that Dante and Erasmus would recognize as theirs’. On the other hand, the modern, secular rights that now constitute ‘core European values’ would ‘leave Dante and Erasmus bewildered.’ There is, in other words, no single set of ‘European values’ that transcends history in opposition to Islamic values.

Moreover, contemporary Islamism is not simply a throwback to the past but draws on some modern themes. ‘Islam may be quantifiably backward’, Caldwell writes, ‘but it is backward at a times when progress has acquired a bad name’. One does not have to be a ‘fundamentalist or a fanatic’, he points out, ‘to worry that it is in the West’s nature to advance too far, too fast. The Greens and anti-globalist movements share such worries. So do an increasing number of thinkers and statesmen.’ Including Caldwell himself. The current encounter with Islam may be ‘painful and violent’, but it has also been, he acknowledges, ‘an infusion of oxygen into the drab, nitpicking, materialist intellectual life of the West’, for which we need to express our ‘gratitude’.

If many of those hostile to Islam are nevertheless often drawn to Islamic criticism of secular humanism, many of those who identify with Islam paradoxically do so for secular reasons. The rioters who set French cities ablaze in the autumn of 2005, Caldwell points out, ‘did not believe in Islam’ but had an attachment to ‘Team Islam’. Support for Islam today is best understood, in other words, not in terms of theology or a clash of civilizations but as part of the rise of identity politics. 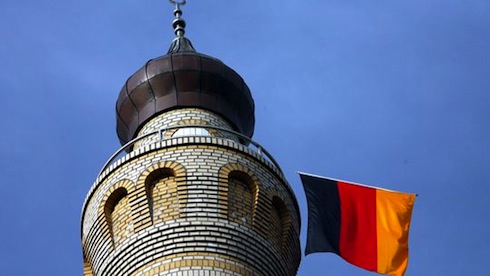 All of which brings us to the third part of Caldwell’s thesis: that Europe is undergoing a crisis of identity that undermines its ability to deal with Islam. ‘A central problem in welcoming people from poor countries’, Caldwell notes, ‘is that Europeans have lost faith in parts of the civilization to which migrants were drawn in the first place’, adding that ‘It is hard to follow Europe’s rules and embrace Europe’s values, as newcomers are sometimes told they must, when Europeans themselves are rewriting those rules and reassessing those values.’ He is right. But it is an argument that sits uneasily with claims about the inherent cultural apartness of Third World and Muslim immigrants. Many immigrants want to join the club, Caldwell seems to be saying, but they can’t because the club has lost its rulebook.

That is why the question with which Caldwell begins the book – ‘Can Europe be the same with different people in it?’ – is so misguided. Caldwell clearly thinks that Europe cannot be the same with different people in it. But in asking the question Caldwell confuses the diversity of peoples and the diversity of values. People of North African or South Asian parentage, he seems to believe, will inevitably cleave to a different set of values than those of European ancestry. Why? Being born to European parents is no passport to Enlightenment beliefs. So why should we imagine that having Bangladeshi or Moroccan ancestry makes one automatically believe in sharia?

Caldwell is no racist, but it is this confusion of peoples and values that connects his argument to that of Stoddard. For both, the presence of too many non-Europeans in Europe is a threat to European values. The confusion of peoples and values also reveals how Caldwell himself has imbibed the contemporary European uncertainty about its values, an uncertainty of which he is so critical. There are no such things as ‘European values’, of course. What has eroded is faith in the idea that it is possible to win peoples of different backgrounds to a common set of secular, humanist, Enlightened values. And that is the real problem: not immigration, nor Muslim immigration, but the lack of conviction in a progressive, secular, humanist project.