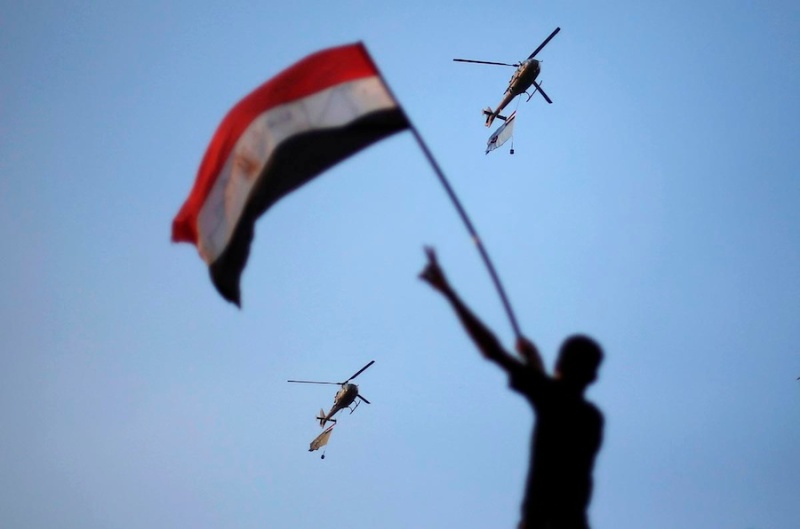 The tragedy of Egypt today is that contemporary events echo a historical pattern repeated again and again throughout the Arab world. Supporters of the coup point out that the Egyptian army is more than merely an army; it occupies, they argue, a special place in Egyptian society. They are right. But the army only does so because of the weakness of the political sphere. There is a long history in the Arab world of popular movements for democratic change and a secular society.  Such movements have, however, often been organizationally fragile and politically incoherent. In their stead, the military has taken on the role of the agent of social change, the mechanism through which the nation is ‘modernized’. Secularism and ‘progressive’ politics have, as a result, long been associated not with freedom and democracy but with military power and authoritarian rule – from Nasserism in Egypt to  Ba’athism in Syria and Iraq. This is turn has encouraged the growth of religious anti-liberal movements, including Islamism.

There was a chance that this time around the Arab Spring might have produced something different. The mass popular protests, against first Hosni Mubarak and then Mohammad Morsi, looked as if they might finally transform Egypt’s political landscape. The very spontaneity of the revolts has been both their strength and their weakness. It revealed the depth of anger at the old regime, and the potency of the desire for democratic change.  But the lack of formal leadership or political organization has once again compromised the ability of protestors to achieve their goals.  Instead, there has been a return to the old pattern, as the army has stepped in to play the role of national saviour.

The Egyptian military has been happy to play along with the idea that its actions are in accordance with the wishes of the people. ‘The people summoned the armed forces for the mission of balancing the tipped scales and restoring diverted goals’, claimed army commander in chief General Abdel Fattah al-Sisi in his broadcast to the nation on Sunday. In reality the diverted goals that the army wishes to restore are not so much popular democracy as the maintenance of social order, political stability and the retention of military power. 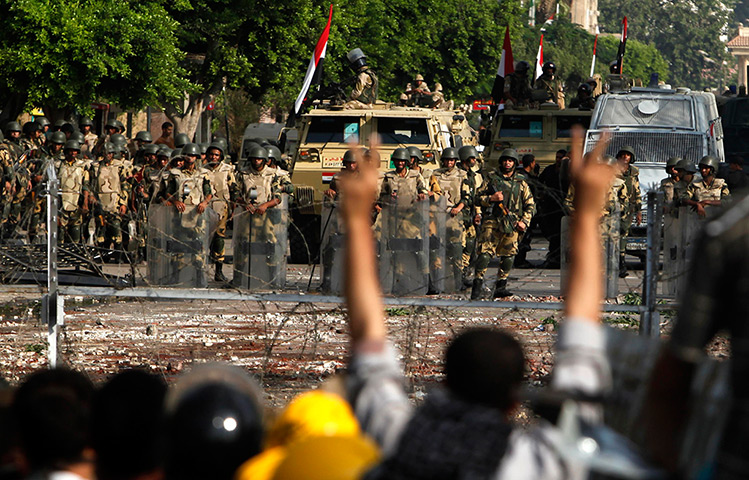 ‘The people’, as one Egyptian blogger observed, were mentioned twenty-eight times in Sisi’s speech, ‘but their sovereignty was not affirmed once’. What was emphasized, rather, was that ‘the armed forces are the unmoved mover, guarding the country’s politics not just its borders’. Sisi’s central point is that ‘Egypt is too important to be ruled by its people’.

This has become the central point of many Western commentators and leaders, too.  The need to maintain order and stability has always shaped Western governments’ attitude to foreign governments. For thirty years, Hosni Mubarak’s brutally dictatorial regime received unstinting support, not to mention fat pay cheques, from European and American governments.  Western leaders were willing to overlook Mubarak’s refusal hold free elections, his banning of all political parties and his savagely repressive police state because he was able to deliver stability, keeping in check radical movements, both secular and Islamic, maintaining peace with Israel and helping America pursue its Middle East policies.  Not long before the fall of the dictator, Barack Obama flatly rejected the claim that Mubarak was an ‘authoritarian ruler’, dismissing such talk as merely ‘criticisms of the manner in which politics operates in Egypt’, and saying of the Egyptian leader that ‘He has been a stalwart ally’ and  ‘a force for stability.’ Even after the Tahrir Square protests started in January 2011, Western leaders continued to back Mubarak as the best means of bringing change. Mubarak, Tony Blair told CNN in February of that year, while millions were still occupying Tahrir Square, remains ‘immensely courageous and a force for good.’ The same considerations now shape Western attitudes towards the military takeover, making Obama reluctant to call a coup a coup, and leading Tony Blair, the man who went to war in Iraq and Afghanistan supposedly to free the people from the shackles of tyranny, to praise the General Sisi for preventing chaos.

Democracy, Blair wrote in support of the coup, ‘is a way of deciding the decision-makers, but it is not a substitute for making the decision.’ A dictator who takes the right decisions, in other words, is preferable to a popularly elected government that takes wrong ones. But what are the right decisions? The decisions that Blair thinks are right will undoubtedly be different from those that I or you might think are right and, more importantly, will undoubtedly be different from those that the people of Egypt might think are right. The whole point of democracy is to provide a mechanism for negotiating such differences. That is why, contrary to what Blair might insist, democracy is not simply a means of ‘deciding the decision-makers’; it is also a mechanism for ‘making the decisions’. Once we give up on that idea, once we take an instrumental view of democracy as a good only when the ‘right’ decisions are made, then we give up on democracy itself. 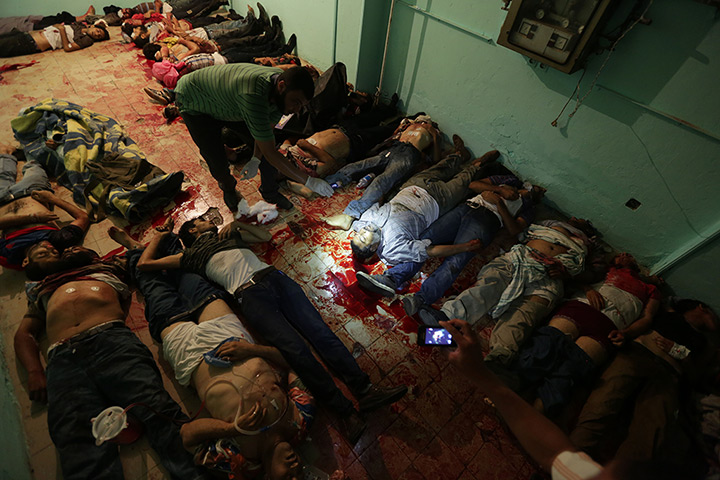 If many Western politicians have embraced the coup because they prefer stability to democracy, many liberals and secularists have done so because of their hostility towards Morsi and the Muslim Brotherhood. I share that hostility. I don’t need any lessons in the perniciousness of Islamism or the need to combat it. We need to challenge those, like Morsi, who seek to use the democratic process to undermine democracy, and attempt to impose illiberal, divisive laws and constitutions. But it hardly helps the argument that democracy is a good if supposed democrats celebrate the military overthrow of a democratically-elected leader, the imprisonment of opposition politicians, and the mass murder of protestors.

Democracy is, of course, not merely about placing a cross on a ballot paper. To envision democracy simply as filling in a ballot paper is to envision a quiescent polity in which class interests, institutional players and entrenched social forces mould the democratic process.  We might vote as individuals in the privacy of the polling booth, but we can only defend democracy by acting collectively. This requires the creation of a robust public sphere, of a democracy that is contested as much on the streets and in the workplace as in the polling station. The popular protests against Morsi, when millions took to the streets to oust him, were a vital part of the democratic process. But the moment the army stepped in, the moment anti-Morsi protestors welcomed the military as a progressive agency of change, the democratic process became warped. The more that the military is allowed to wield power, the more that the public sphere decays.

To oppose the army coup, to oppose the imprisonment of Morsi and other Brotherhood leaders, to oppose the shooting dead of Islamist protestors, is not, as many have suggested, to defend Islamism. Tyranny and repression do not become acceptable just because the targets of such tyranny and repression are Islamists or anti-democrats. The fruits of democracy and freedom must apply to all or they become meaningless. We have to oppose the army coup for the same reason that we have to oppose Mohammed Morsi and the Muslim Brotherhood: to defend freedom and democracy as goods in themselves.