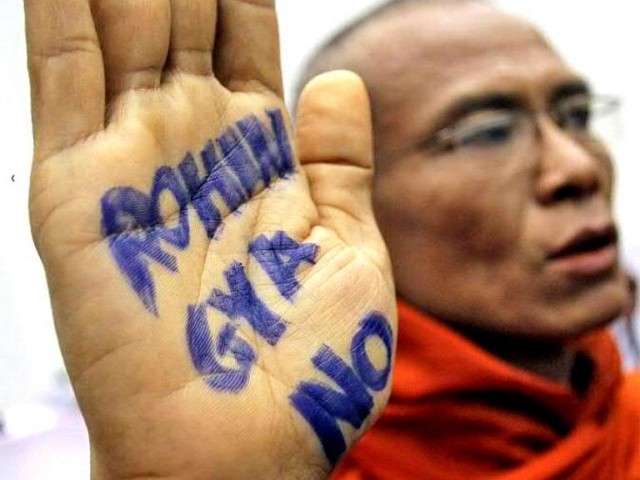 There is perhaps no religion that Western liberals find more amenable than Buddhism. Politicians fawn over the Dalai Lama, celebrities seek out Buddhist meditation, many scientists and philosophers insist that Buddhism has much to teach us about human nature and human psychology. Even many of the so-called New Atheists have fallen for Buddhism’s allure, albeit as a philosophy rather than as a faith. For most of its Western sympathisers, Buddhism is a deeply humanist outlook, less a religion than a philosophy, a way of life to create peace and harmony.

Myanmar’s Rohingya have a different view of Buddhism. The Rohingya are Muslims who live mostly in Rakhine, in the north west of the country, bordering Bangladesh. Early Muslim settlements date back to the 7th century. Today, in a nation that is 90 per cent Buddhist, there are some 8 million Muslims of which probably a quarter are Rohingya. Many feel they are fighting for their very existence.

The military junta that came to power in Myanmar in 1962 (or Burma as it was then) has, over the past half century, sought to build popular support for its rule by fomenting hatred against minority groups. The Rohingya have been stripped of citizenship and officially declared foreigners in their native land. Restriction have been placed on the Rohingya owning land, travelling outside their villages, receiving an education and having children.

The recent successes of the democracy movement has paradoxically only worsened the problems of the Rohingya. The junta, still clinging to power, has sharpened its anti-Rohingya rhetoric in an attempt to bolster its position. The democracy movement has refused to support the Rohingya for fear of alienating its largely Buddhist constituency. The leader of the democracy movement, the Nobel Laureate Aung San Suu Kyi, has been shamefully silent. When asked to condemn violence against the Rohingya, the furthest she has been willing to go is to condemn violence in general. Many members of her National League for Democracy are openly involved in extremist anti-Rohingya organizations.

The result has been over the past year an unprecedented series of pogroms against the Rohingya. Villages, schools, workplaces and mosques have been attacked and torched by Buddhist mobs, often aided by the security forces. Hundreds of Rohingya have been killed and some 140,000 left homeless.

The anti-Muslim campaign has been led by monks who justify their actions as in keeping with the demands of Buddhism. The principal anti-Rohingya organization, the 969 movement, takes its name from the traditional nine qualities of Buddha, six qualities of his teachings and nine qualities of the monks. Its leader, a monk named Wirathu, has reportedly called himself the ‘Burmese bin Laden’. Muslims, he insists, ‘breed quickly and they are very violent and they eat their own kind’. Because ‘the Burmese people and the Buddhists are devoured every day, the national religion needs to be protected.’ Another prominent 969 monk, Wimala Biwuntha, insists that without the anti-Royhinga campaign ‘we’ll lose our religion and our race’. Myanmar’s minister of religious affairs, Sann Sint, has backed the anti-Rohingya campaign.

Buddhist pogroms against Muslims are not confined to Myanmar. In Sri Lanka, too, nationalism and Buddhism have become entangled. Buddhist chauvinism provided spiritual backing for the authorities in their bitter and bloody war against the Tamil Tigers. Since the end of that war, such chauvinism has been mobilized against Muslims. Groups such as the Bodu Bala Sena (‘the Army of Buddhist Power’) have sought systematically to demonise Muslims, accusing them of eroding the nation’s Buddhist heritage. They have attacked Muslim homes, shops and workplaces, closed down halal butcheries, and razed mosques. As in Myanmar, many of these attacks have been led by saffron robed monks justifying their actions through ancient Buddhist texts.

The violence in Myanmar and Sri Lanka upends many of the conventional stereotypes of Muslims as fomenters of violence and of Buddhists as purveyors of peace. How do we reconcile the perception of Buddhism as a philosophy of peace with the ugly reality of Buddhist-led pogroms?

Most observers would, rightly, reject the idea that there is something inherent in Buddhism that has led to the violence. Rather, most would recognize that the anti-Muslim violence in both Myanmar and Sri Lanka has its roots in the political struggles that have engulfed the two nations. The importance of Buddhism in the conflicts in Myanmar and Sri Lanka is not that the tenets of faith are responsible for the pogroms, but that those bent on confrontation have adopted the garb of religion as a means of gaining a constituency and justifying their actions.

What is true of the conflicts in these countries is true also of many other conflicts. Many of the world’s flashpoints have developed out of confrontations between religious groups. The spawning of religious conflicts led many to see religion itself, and Islam in particular, as the root of such conflicts.

Religion does, of course, play a role in such confrontations. The tenets of, say, Islam are very different from those of Buddhism, and I would not wish to suggest that there is any equivalence between the two. Nevertheless, it would be as wrong to see many, perhaps most, of these conflicts as purely religious confrontations as it would be to see the anti-Rohingya pogroms as a religious war. Many have, like the confrontations in Myanmar and Sri Lanka, complex social and political roots, as groups vying for political power have exploited religion and religious identities to gain support. The importance of religion in these conflicts is often less in creating the tensions than in helping establish the chauvinist identities through which certain groups are demonized and one’s own actions justified.

At the same time, what are frequently seen as a continuum of struggles may well be a series of disparate confrontations. Every conflict involving Islam, for instance, is often seen another moment in the worldwide jihad. The struggles of Islamists in Pakistan, of jihadis in Somalia, of Algerian youth in France and of the Uyghur in China may all be branded as expressions of ‘Islamic violence’. But each is its own struggle, each has its own causes, each is energised by its own dynamic. To parcel up all these confrontations under a single label, and to view them all as manifestations of a single war, merely because many of the protagonists call themselves ‘Islamic’, is to view the world in almost as black and white terms as do those at the heart of these conflicts.

The anti-Muslim violence in Myanmar and Sri Lanka may make us question our preconceptions about Buddhism. It should certainly make us question the actions, and the silence, of a figure like Aung San Suu Kyi, generally seen in the West as a fearless warrior for liberty. Perhaps, too, it will prompt us to think again about other global conflicts, and about the role of religion in those conflicts, and to adopt more nuanced, less black-and-white views.

The photos are from AP/Independent and Radiance Weekly