I am away for a couple of weeks, so the next few posts will be from the archives – old material that I have not previously published on Pandaemonium. All will, in fact, be book reviews that explore themes of race, difference and identity. This first is a review of David Cannadine’s Ornamentalism, first published in the New Statesman, 7 May 2001.

Review of David Cannadine,
Ornamentalism: How the British Saw Their Empire
(Allen Lane, 2001)

In October 1865, a local rebellion by peasantry in Jamaica was put down with the utmost ferocity by the island’s governor Edward John Eyre. Eyre’s actions generated considerable debate in Britain. Most of those who defended his viciousness did so on the grounds not that Jamaicans were black but that they were no different from English workers. ‘The negro’, observed Edwin Hood, ‘is in Jamaica as the costermonger is in Whitechapel; he is very likely often nearly a savage with the mind of a child.’ The liberal Saturday Review suggested that ‘the negro is neither ferociously cruel nor habitually malignant. He often does cruel and barbarous things, but then so do our draymen and hackney-coachmen and grooms and farm servants, through want of either thought or power of thinking.’

The concept of ‘race’ today is so intertwined with the idea of ‘colour’ that it is often difficult to comprehend the Victorian notion of racial difference. For Victorians, race was a description, not so much of colour differences, as of social distinctions,. The English lower classes were, to nineteenth-century eyes, as racially different as were Africans or Asians. A report in the Saturday Review about working class life observed that ‘The Bethnal Green poor are a caste apart, a race of whom we know nothing, whose lives are of quite different complexion from ours, persons with whom we have no point of contact.’ ‘Distinctions and separations, like those of English classes’, the Review suggested, ‘which always endure, which last from the cradle to the grave, which prevent anything like association or companionship, produce an effect on the lives of the extreme poor, and subject them to isolation, which offer a very fair parallel to the separation of the slaves from the whites.’

This separation of classes was important because each had to keep to their allotted place on the social ladder. ‘The English poor man or child’, the article concluded, ‘is always expected to remember the condition in which God has placed him, exactly as the negro is expected to remember the skin that God has given him. The relation in both instances is that of perpetual superior to perpetual inferior, of chief to dependent, and no amount of kindness or goodness is suffered to alter this relation.’

Much recent academic debate has ignored the peculiar character of nineteenth century thinking about race. Ignoring both the Victorian views of the working class, and their perception of commonalities between European and non-European societies, such academic writing insists that the key division for Victorians was between ‘the West’ and ‘the Rest’. Influenced by Edward Said’s seminal work Orientalism, it has become almost axiomatic among anthropologists, sociologists and historians that ‘race’ has always referred to differences of colour, and that Europeans have always tended to view non-Europeans as the ‘Other’ – different, exotic, inferior. According to Stuart Hall, for instance, Europe has defined itself since the Renaissance through the ‘discourse of the Other’ which ‘represents what are in fact very differentiated (the different European cultures) as homogenous (the West)’ and ‘asserts that these different cultures are united by one thing: the fact that they are all different from the Rest’.

In Ornamentalism David Cannadine provides a welcome challenge to this academic orthodoxy, by rethinking British perceptions of its empire. The title of the book is a parody of Said’s work, and Cannadine loses no time in demolishing Said’s vision of British imperialism. ‘We need to recognise’, he writes, ‘that there were other ways of seeing the empire than in the oversimplified categories of black and white with which we are so preoccupied. It is time we reoriented orientalism.’

The British Empire, Cannadine argues, ‘was not exclusively (or even preponderantly) concerned with the creation of “otherness” on the presumption that the imperial periphery was different from, and inferior to, the imperial metropolis.’ Rather, ‘it was at least as much (perhaps more?) concerned with what has been recently called the “construction of affinities” on the presumption that society on the periphery was the same as, or even on occasions, superior to, society in the metropolis.’ Viewed in this fashion, the Empire was ‘about the familiar and the domestic, as well as the different and the exotic’. Indeed, Cannadine suggests, ‘it was in large part about the domestication of the exotic – the rendering and reordering of the foreign in parallel, analogous, equivalent, resemblant terms.’

The question of what the Empire looked like to those who ran it, Cannadine suggests, has been relatively ignored, by historians, whether critical or admiring of the Empire. And what it looked like was not that different to what Britain looked like. Politicians and administrators envisaged the social structure of their empire ‘by analogy to what they knew of as “home”… or (even, and increasingly) in nostalgia for it.’ The British were motivated as much by considerations of class as of colour.

The vision of a single, interconnected, hierarchical world led to a complex, even contradictory, view of the Empire, and its subjects. On the one hand, the fact that Britain (and a handful of other largely white nations) now ruled the globe appeared to confirm a sense of inherent superiority. As Lord Rosebery put it, ‘What is Empire but the predominance of race?’ On the other hand, a hierarchical view of the world, paradoxically, helped undercut such racial perceptions. Because the British elite viewed the social structure of their colonies as similar to that of Britain, so their colonies, and their inhabitants, appeared less exotic or different than has been often supposed. Hierarchy, as Cannadine puts it, ‘homogenised the world’.

Moreover, Cannadine observes, ‘depending on context and circumstances, both white and dark-skinned peoples of the empire were seen as superior; or alternatively as inferior.’ British imperialists loathed Indians and Africans no more nor less than they loathed the great majority of Englishmen and were far more willing to work with maharajahs, kings, and chiefs of whatever colour than with white settlers, whom they generally considered as uneducated trash. Just as Jamaican peasants and East End costermongers were viewed as equally inferior, so Indian princes and West African tribal chiefs were often understood as the social equivalent of English gentlemen. Indeed, British rulers were often amused that lower class white settlers were unable to comprehend that aristocratic breeding cut across differences of colour. Lady Gordon, wife of Arthur Hamilton Gordon, the governor of Fiji, thought the native, high-ranking Fijians ‘such an undoubted aristocracy’. ‘Their manners’, she wrote, ‘are so perfectly easy and well bred… Nurse can’t understand it at all, she looks down on them as an inferior race. I don’t like to tell her that these ladies are my equals, which she is not!’

The development of democratic ideals in the early decades of the twentieth century transformed elite perceptions of race and empire, and often in contradictory ways. The gradual admission of the working class into the system of political democracy at home modified the application of the language of racial inferiority to the working class. The belief that the lower orders were inferior did not disappear but it became less public and increasingly confined to private diaries and dinner table talk. The public language of race was refocused exclusively on black and white, the West and Rest, helping to establish the ‘colour line’ in its modern form.

At the same time, there developed among sections of the elite a more romantic attachment to Empire as the last repository of the kinds of traditional hierarchies that were disappearing at home. For many within the ruling class, Cannadine observes, society overseas was ‘actually better’ than that at home – ‘purer, more stable, more paternal, less corrupted’. But of course, the yearning for freedom and democracy existed as strongly, if not more so, in the colonies as it did in Britain. The growing nationalist movements challenged the rule both of the British imperialists and the local aristocratic leaders with whom the imperialists had found such a natural affinity. The British preoccupation with ‘traditional’ India ‘encouraged them to ignore, or wish away, or disregard, the alternative India that was coming into being: urban, educated, modernising middle class, nationalist.’ How ironic, Nehru once observed, that the representatives of the dynamic, progressive West should ally themselves with the most conservative and oppressive elements of the backward East. 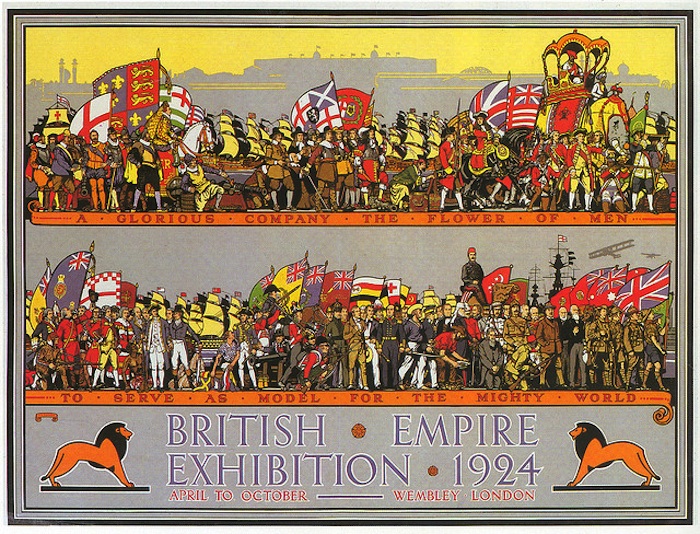 The importance of Ornamentalism lies not just in making us rethink the past. It also helps us re-evaluate the present. The fractious debates that have taken place in recent weeks about race and identity reveals the difficulties that exist in thinking about race in the post-imperial world. Cannadine suggests provocatively that ‘hierarchical empires and societies, where inequality was the norm’ were in a certain sense ‘less racist than egalitarian societies, where there was (and is?) no alternative vision of the social order from that of collective, antagonistic, and often racial identities’. The British Empire, he suggests, predicated as it was ‘on individual inequality, had ways of dealing with race that contemporary societies, dedicated to collective equality do not.’

There may seem to be something wilfully perverse about the idea that nineteenth century Britain, or its empire, was ‘less racist’ than the contemporary nation. Nevertheless there is an element of truth to Cannadine’s argument. Nineteenth century thinkers and administrators combined a belief in natural inequality with a belief in the ‘universality’ of the world – the conviction that they lived in ‘one vast interconnected world’, as Cannadine puts it. Today, in the post-Holocaust era, we have by and large rejected ideas of natural inequality – but also ideas of universality. Indeed, in the ‘West and the Rest’ tradition, universalism is itself regarded as a product of racism, a means by which the West has silenced the voices of the Rest. The consequence has been not the embrace of equality, but the reframing of inequality as ‘difference’. We have managed to combine today a formal belief in equality with the practical creation of a more fractious, fragmented, identity-driven world.

Against this background, the moral of Cannadine’s story is not so much that an empire built ‘on individual inequality, had ways of dealing with race that contemporary societies, dedicated to collective equality do not’. It is rather that an age that enjoyed a bullish belief in the ‘sameness’ of the word possessed certain resources to cope with problems of difference that we no longer do, despite the fact that race and inequality were much more central aspects of the Victorian world-view. If we truly want to bury Victorian ideas of inequality, then we must repossess their belief in universality.

The top painting is Thomas Jones Baker’s ‘The Secret of England’s Greatness’.