This is the full version of my essay on British perceptions of German history published last month in the International New York Times under the headline ‘Germany’s History Lesson for Britain’.

Ernst Barlach was one of Germany’s great Expressionist artists of the early 20th century. A virulent nationalist in the run-up to World War I, Barlach found that his experience of the Western Front stripped him of his jingoism. Much of his subsequent work explored the sorrow and suffering that he saw as the human condition.

In 1927, he created for the cathedral in Güstrow, a small town north of Berlin, a war memorial called Der Schwebende (‘the Floating One’). The sculpture featured a figure with a haunted, grief-stricken face cast in bronze and suspended from the ceiling, as if hovering, angel-like, over the fields of Flanders. Ethereal and transcendent, the memorial is far from the monumental structures that usually commemorate the fallen, and yet captures so starkly the loneliness and terror of war.

In 1937, the Nazis declared Der Schwebende ‘degenerate’ and later melted down Barlach’s work to make munitions for the next war. Thankfully, a new figure was cast from a secret copy, and after World War II it was installed at Güstrow, which then stood in the eastern half of the divided Germany. Last year, after much debate, the congregation of Güstrow Cathedral agreed to lend the statue to the British Museum in London to help the process of reconciliation during the centenary of World War I. Barlach’s angel now floats above the museum’s new exhibition on German history.

This show, ‘Germany: Memories of a Nation’, which opened in October to coincide with the 25th anniversary of the fall of the Berlin Wall, tells the story of Germany through a series of objects that range from a copy of Martin Luther’s first German Bible, to the gates of Buchenwald concentration camp, to a fragment of the Berlin Wall, pulling together the threads of both civilization and barbarism that make up the nation’s history. How, asks the exhibition, can anyone understand a nation’s history when burned into our gaze is a darkness as unfathomable as the Holocaust? And how can a nation’s identity be reconstructed after such an episode?

These are questions with which Germany has wrestled for the past seven decades. But they are equally important to Britain. Britain possesses a particularly myopic view of German history, and that myopia reveals much about the deep lack of self-awareness about its own history.

‘Two world wars and one World Cup’, runs a popular English football slogan. (For those not familiar with Britain’s footballing history, England won the 1966 World Cup on home soil, beating Germany in the final. England has never reached a final since, whereas Germany has since won the tournament three times, most recently this year.) The slogan sums up Britain’s attitude toward Germany over much of the past half-century and more. Britain’s part in the Allied victory over Hitler’s Germany was its last act as a true world power. That historical moment provided both a means of accessing a seemingly glorious past to buttress a less than glorious present, and a precious asset in promoting a sense of what it still meant to be British. So, baiting Germany about defeat, whether on the battlefield or the football pitch, became as much part of being British as drinking tea or complaining about a wet summer. From a constant diet of World War II films on TV to excruciating jokes about vacationing Germans always seizing the best lounge chairs by the pool, anti-German chauvinism was stitched into British culture.

Both the idea of Britishness and Britain’s sense of itself in the world have, however, been transformed in recent decades. Old-fashioned notions of race and Empire in which British identity was traditionally rooted have been all but erased. As the recent debate over Scottish independence revealed, the very idea of Britishness is now being called into question. In today’s post-9/11, multipolar world, there is less profit in defining Britishness through ‘Kraut bashing’. There has developed in recent years in Britain a more ambivalent, less antagonistic view of Germany.

But even as anti-German chauvinism has softened, myopia about Germany’s place in history has remained undiminished. A century ago, most educated Britons would have had a deep appreciation of German history, music, philosophy and literature. Today, the role of Germans from the Enlightenment to Modernism in constructing our very conception of the world is barely acknowledged and little understood. For most Britons, knowledge of Germany is still refracted through the lens of ‘Two world wars and one World Cup’. 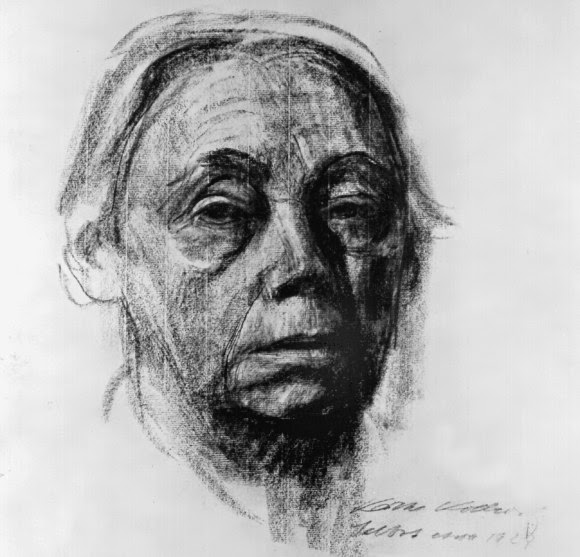 It is not just German history about which Britain lacks insight. The enormity of the Holocaust has forced Germany to address the darkest aspects of its past. Britain has never had to think about its history in that fashion. From the Opium Wars to the Bengal famine, the shameful episodes of Britain’s imperial past are rarely discussed.

Perhaps nowhere is this blind spot more obvious than in the current debate about World War I. There has been much discussion in Britain about the role of German militarism and imperial ambitions in fomenting war. Rarely acknowledged is that all the great powers of the time had expansionist aims; that in the decades leading to the war, they had carved up the globe among them; that at the center of the global imperialist network stood not Germany but Britain.

Set against such historical blindness, there is something resonant about Ernst Barlach’s floating sculpture, which embodies so many of the complexities and contradictions of history. The story of the sculpture, as the British Museum’s director Neil MacGregor wrote in the Guardian, ‘is the biography of Germany in the 20th century’, from the militarism of 1914 and the reaction against it, to the horrors of Nazism, the postwar division of Germany and the continuing quest for reconciliation.

That Barlach’s work can carry so much weight of meaning says much about its haunting power. But it also asks questions of us. Can we carry that weight? Can we stop viewing history as black-and-white, and start acknowledging its complexities and contradictions?

The images are of Ernst Barlach’s Der Schwebende being prepared for show at the British Museum; and a self-portrait of Kathe Kollwitz, the German artist who was the model for the face of Barlach’s angel.