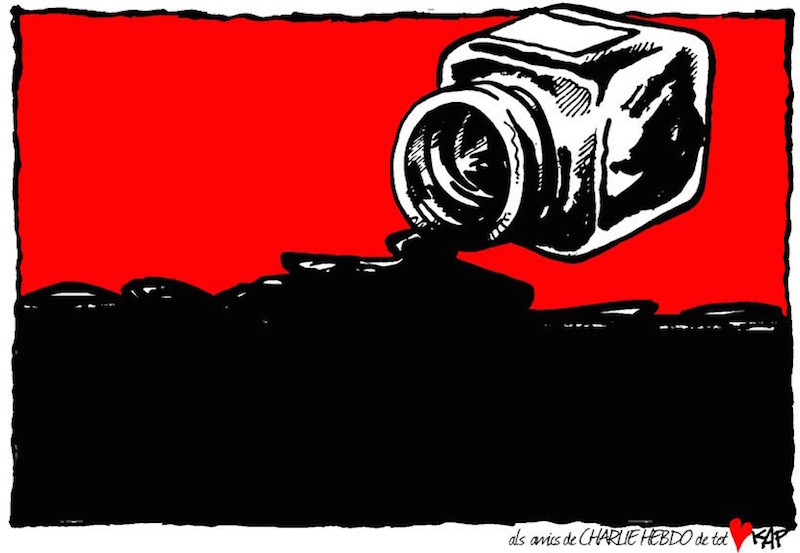 I took part on Friday in a debate on ‘The state of free expression after Charlie Hebdo‘ at the Wilderness Festival, with Anshuman Mondal and Tahmima Anam. It was a good debate, but frustratingly short. I agreed with virtually all the issues raised by Tahmima Anam (her main argument, from the perspective of a Bangladeshi-born writer, was that the state is amore dangerous threat to free speech than extremist groups.) But Anshuman Mondal (‘There is almost nothing that Kenan and I agree on’, as he himself put it in the debate’) raised many points to which I would have liked to respond, but had not the time. So, let me pick up here two of the issues he raised.

The problem with the free speech debate, Mondal suggested, is that it has become polarized between those who are for and against free speech when in fact the debate about freedom is much more difficult. Freedom, he suggested, is ‘not a straightforward issue’; One cannot simply be ‘for or against freedom’. Nor can one see freedom merely as an ‘absence of restrictions’. It is also about the ‘assumption of responsibilities’.

I wonder if Mondal would have made the same argument 200 years ago during the debate about the abolition of slavery? ‘Freedom is not a straightforward issue. One cannot simply be for or against the abolition of slavery. We have to be more nuanced in the way we look upon the issue. We cannot simply see it as a matter of an absence of restrictions. Those being offered freedom have to accept their responsibilities too.’

Or 100 years ago during the debate about women’s suffrage? ‘It’s all very well talking about equal rights for all, but freedom is not a straightforward issue. One cannot simply be for or against the idea that all adults should have the vote. Women may deserve the vote, but they must recognize that there are responsibilities that come with that right, and they must use their vote responsibly.’

As for the idea of using free speech ‘responsibly’, in one sense, that is a truism with which nobody could disagree. After all, there is almost nothing we do that doesn’t come with responsibility. But what does it actually mean to speak ‘responsibly’? That depends on who defines ’responsibility’. For the Russian government it means not mocking President Putin. For the US government, not revealing NSA secrets. For many gay groups not talking of homosexuality as a sin. For many Muslim groups, not depicting the Prophet.  And so on.

‘Use speech responsibly’, in other words, means ‘Speak in a way that does not challenge certain forms of power, or certain kinds of beliefs’. To accede to that is actually what is irresponsible.

No doubt, Anshuman Mondal and I will continue this discussion over time (here is an earlier debate between us). And here below are my introductory points in the Wilderness debate.

The question we are addressing today is: ‘How have the Charlie Hebdo killings changed the debate on free speech?’ In my view, and paradoxically perhaps, the answer is ‘hardly at all’.

Back at the time of killings there was shock and outrage and a sense of solidarity with the magazine. But that has done little to change underlying attitudes to free speech. What has developed over the past two decades is what we might call a moral commitment to censorship; the belief that because we live in a plural society, so we must police public discourse, and constrain speech so as not to give offence to different cultures and faiths.

A plural society is precisely where we need the fullest extension possible of free speech. In such societies, it is both inevitable and important that people offend the sensibilities of others. Inevitable, because where different beliefs are deeply held, clashes are unavoidable. And they are better resolved openly than suppressed in the name of ‘respect’ or ‘tolerance’.

And important because any kind of social change or social progress requires offending some deeply held sensibilities. ‘You can’t say that!’ is all too often the response of those in power to having their power challenged, whether they be politicians or religious leaders. To accept that certain things cannot be said is to accept that certain forms of power cannot be challenged.

The notion of giving offence suggests that certain beliefs are so important or valuable to certain people that they should be put beyond the possibility of being insulted, or caricatured or even questioned. The importance of the principle of free speech is precisely that it provides a permanent challenge to the idea that some questions are beyond contention, and hence acts as a permanent challenge to authority.

A key thread of the post-Charlie Hebdo debate has been the suggestion that the magazine was ‘racist’. The job of satirists, many critics suggest, is to challenge those in power. In mocking Islam, Charlie Hebdo was ‘punching down’, attacking the weakest sections of society, not the strongest.

The idea that Charlie Hedbo is racist is absurd. It’s been central to the struggle against racism in France. And vociferously defended by French anti-organizations, such as SOS Racisme.

What’s really racist is the idea that only nice white liberals want to challenge religion or can handle satire. Those who claim it’s ‘racist’ or ‘Islamophobic’ to mock the Prophet Mohammad appear to imagine with the racists that most Muslims are reactionaries.

It’s one thing to suggest that satire works best when mocking those that deserved to be mocked. It’s quite another to define who it is that deserves to be mocked. Yes, there is discrimination against, and hostility towards, Muslims. But that does not make any criticism of Islam or of Muslims a case of ‘punching down’.

What is called ‘offence to a community’ is more often than not actually a struggle within communities. There are hundreds of thousands, within Muslim communities in the West, and within Muslim-majority countries across the world, challenging religious-based reactionary ideas and policies and institutions; writers, cartoonists, political activists, daily putting their lives on the line in facing down blasphemy laws, standing up for equal rights, fighting for democratic freedoms. For such progressive voices challenging religion is no more ‘punching down’ than is challenging racism. It is such progressives whom we betray with the demand to censor offence.

In a plural society, much of what we say, others will find offensive. That, almost by definition, is what it is to live in a plural society. If we restrict the freedom to give offence, we restrict effectively the right to speak. We also reject religious freedom. Much of what believers of one faith believe, believers of another faith, or non-believers, will find offensive. Without the freedom to offend there can be no religious freedom.

The cartoons are by Kap, Mazen Kerbaj and Lucille Clerc.