Many supporters of Israel today deem anti-Semitic any criticism of Zionism on the ground that it denies Jewish self-determination. That, too, is to confuse legitimate criticism of an ideology with illegitimate bigotry.

Many respondents have argued that anti-Zionism is necessarily a form of anti-Semitism because it denies ‘Jewish self-determination’ and uniquely denies the right of the Jewish people to their own nation. I disagree with this argument, but I also think that there is an important truth contained in it, a truth that many anti-Zionists today refuse to acknowledge. I disagree, in a sense, with the arguments of both Zionists and of anti-Zionists.

Since this is an important issue that requires wider discussion and debate, I thought I would republish here, as a stand-alone post, an edited version of one of my replies (to Mark Rosenthal, whose original comment is here) but also extend it to make the broader point about the problems with both Zionism and anti-Zionism today.

At the heart of Mark Rosenthal’s argument is the claim that an anti-Zionist is:

one who believes that the Jews should not have their own nation, willfully ignoring the fact that two millennia of history have demonstrated that this would return them to the condition of subservience and vulnerability that caused so many of them to lose their lives, livelihoods, and possessions. I feel that anyone who ignores that likelihood, or who believes they should be returned to that condition should also be considered an anti-Semite.

The English people have never faced persecution on a scale anything like that [which Jews have faced], yet I’m quite certain that they would consider anyone who suggested that the English don’t deserve a nation, and proposed that England ought to be dissolved and the English people should all be moved elsewhere would be considered an anti-English bigot. Zionism is simply a recognition that the Jewish people deserve no less than the English, and especially so in light of the long history of brutality the Jews have faced.

These are both arguments central to any Zionist perspective. They are also, it seems to me, mistaken.

Zionism is a form of nationalism. There are many expressions of nationalism that I oppose. I opposed, for instance, the Scottish demand for nationhood in the run-up the 2014 referendum for independence. That did not mean that I wanted to visit oppression or terror upon Scots. It simply meant that, in my view, the interests of Scots (and of non-Scots) were not best served through the creation of a separate Scottish nation.

It is true, of course,  that Scots have never suffered a Holocaust, nor the long history of oppression that Jews have faced. The fact of the Holocaust and of that history of oppression may, in one’s view, be an argument in support of Zionism. But it does not make those who oppose Zionism de facto anti-Semites. Far from it – the debate, fundamentally, is about whether or not Zionism best serves the interest of Jews. Given that the vast proportion of Jews live outside of Israel, the claim that it is the existence of the Jewish state that protects Jews from another Holocaust and that, without Israel, Jews would be ‘returned[ed]… to the condition of subservience and vulnerability that caused so many of them to lose their lives, livelihoods, and possessions’, seems, at the very least, disputable.

Prior to the Holocaust, and more especially prior to the creation of the state of Israel, Zionism was a minority view within Jewish communities. The majority of Jews, despite their history of oppression, did not accept the Zionist vision. That is not the case today. But the fact the majority of Jews now accept Zionism does not make opposition to it necessarily anti-Semitic, any more than it did in the days when the majority of Jews opposed it. To declare anti-Zionism in itself to be anti-Semitic is no more valid than declaring (as some do) that Zionism is in itself racist. Both are means of cutting off debate, of refusing properly to engage with contrary arguments, but simply of dismissing them as illegitimate.

Similarly, I agree with the right of Jews (and of non-Jews) who now live in Israel/Palestine to collective determine their future. But the Zionist notion of ‘self-determination’  expresses something different. It embodies the idea that Jews anywhere in the world ‘self-determine’ by determining the founding and the future of a state in which the vast majority of Jews do not live, will not live, could not live, and do not wish to live. That, to me, is a highly implausible notion of ‘national self- determination’.

This is also why Mark Rosenthal’s analogy with English self-determination does not work. Mark argues that ‘anyone who suggested that the English don’t deserve a nation, and proposed that England ought to be dissolved and the English people should all be moved elsewhere would be considered an anti-English bigot.’

Let us leave aside the complication that England as a ’nation’ exists not as a self-standing state but as part of the state of the United Kingdom. The point that Mark is trying to make is obvious, and could be applied without complication to the case of France or of India. But the analogy is also false. ‘Self-determination’ when it comes to England is defined with respect to those who live in England, not to those who are defined as ‘English’ by certain norms of heritage wherever they may live in the world. Similarly with France, India, etc.

There is a sense, though, in which Mark Rosenthal is right. While he does not explicitly make the argument, implicit in his reasoning is the claim that anti-Semitism today is rooted in a hatred of Israel, and so cannot be separated from anti-Zionism. The former Chief Rabbi of Britain, Jonathan Sacks, expressed this argument well in a recent interview on BBC Newsnight. The shape of anti-Semitism, he argued, has mutated through history. In the pre-modern world, it was rooted in a hatred of Judaism as a religion. Then, in the nineteenth and early twentieth centuries, it became a racial issue: a hatred of Jews as a race. Today, Sacks argued, anti-Semitism is inextricably linked to a hatred of Israel. Anti-Zionism, he argued, is ‘the new anti-Semitism’.

I do not accept, as I have already made clear, the elision of anti-Zionism and anti-Semitism. And, yet, there is much truth to the claim that anti-Semitism today is rooted in a hatred of Israel. As I argued in my original essay

Many who support the Palestinians now seem genuinely unable to distinguish between criticizing the policies of the Israeli government and sowing hatred against a people.

Before 1948, anti-Zionism was the argument that the creation of a separate Jewish nation would not best serve the interests of Jews. Today, of course, that Jewish nation exists, in the form of Israel. Any anti-Zionist argument (unless it is rooted in the demand for the ‘destruction of the state of Israel’) must begin with the acknowledgement of the existence of Israel and of the presence there of more than six million Jews, whose rights and needs and aspirations are central to any discussion of the future of Israel/Palestine. It is the failure of many anti-Zionists to acknowledge this that leads to the slippage between anti-Zionism and anti-Semitism. It is this failure of perspective that led Ken Livingstone, for instance, to claim, that ‘a real anti-Semite doesn’t just hate the Jews in Israel, they hate their Jewish neighbour in Golders Green or in Stoke Newington’. What lies at the heart of such a claim is not old-fashioned anti-Semitism but an anti-Zionism that fails to comprehend that the rights and needs and aspirations of Jews in Israel are as significant as those of Jews in Golders Green or Stoke Newington.

It is also why Labour MP Naz Shah could joke about Israel being ‘relocated’ to the USA. In making the analogy between Jewish and English nationhood, Mark Rosenthal observed that anyone who proposed that ‘the English people should all be moved elsewhere would be considered an anti-English bigot’. In my original response I argued that

That is true. I should also have acknowledged, however, that, in practice, the refusal of many anti-Zionists to accept that Jews in Israel have the right to be there leads them, indeed, to talk of ‘relocation’ and of Jews being moved elsewhere. 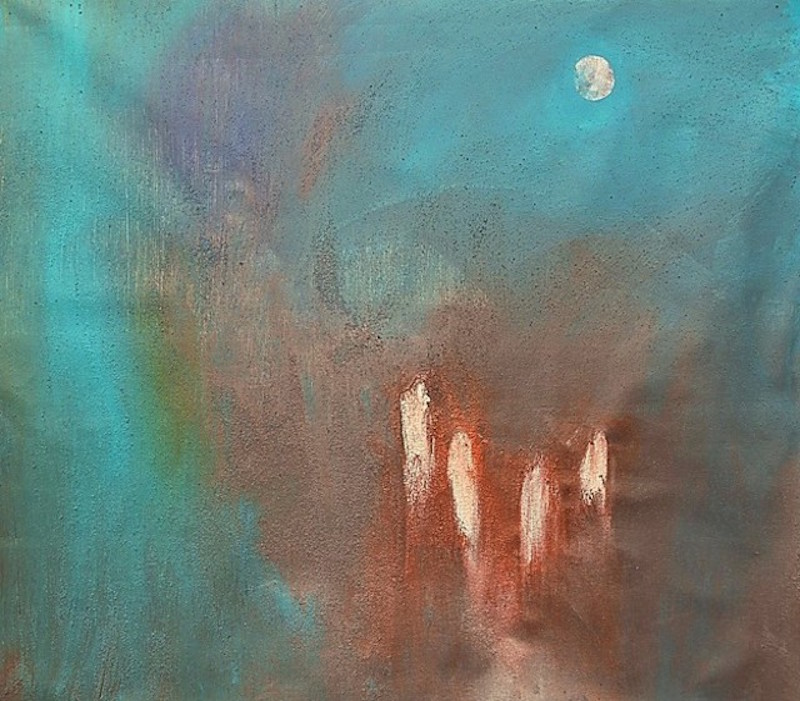 The paintings are all different picturing of the Exodus: from top down, by Marc Chagall (‘Moses and his people, from the Exodus series), Mel Brigg, Marcella Doane and Emilio Merlina.