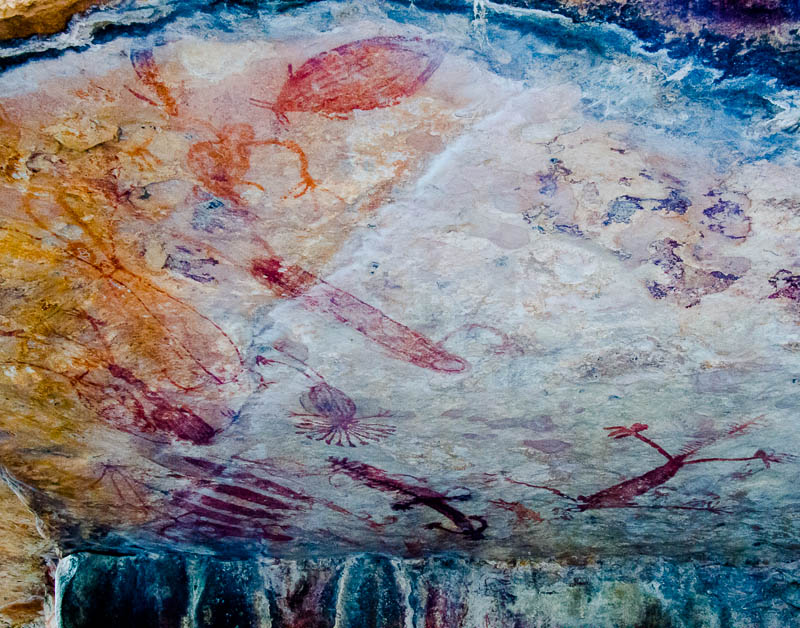 Ubirr is to Australia as Chauvet and Lascaux are to Europe – perhaps the finest rock art on the continent. It lies in Arnhem Land in the far north, on the edge of the Nadab floodplain, in the traditional lands of the Gagudju people. Today, it is part of the Kakadu National Park.

The art at Ubirr spans a period of perhaps 40,000 years from the Paleolithic to virtually the present. None of the art has been carbon-dated, so all the dating is an estimate. However, the earliest art here is generally seen as being some 30,000 to 40,000 years old. Most of the art was probably created during the later periods of the Mesolithic (about 10,000-6,000 BCE) and the Neolithic (about 6,000-2,000 BCE) periods, and .

The paintings are conventionally divided into three periods – Pre-Estuarine (50,000 to 6000 BCE), Estuarine (6000 BCE – 500 CE) and Freshwater (less than 500 years old). As the names suggest, the different periods refer to the character both of the art and of the landscape.

In the Pre-estuarine period, which roughly corresponds to the Upper Paleolithic in Europe, sea-levels were much lower and the climate was more arid. Much of the art depicts different tribes, hunting habits, and aspects of spiritual life. The art varies from hand stencils to large naturalistic portrayals of animals, such as crocodiles, kangaroos and turtles (as well as the now-extinct Tasmanian tiger) to humans drawn both naturalistically and stylistically, hunting, dancing and in various spiritual activities. There are also depictions of mimi, spirits who are said to have taught humans to hunt and paint during the Dreaming, or creation period.

The Estuarine period, corresponding to the European Neolithic, saw the flooding of river valleys and the formation of mangrove swamps. The art includes not just naturalistic depictions of animals and humans but the beginnings of the ‘X-ray’ style of painting in which are depicted the internal anatomical structures, including skeletons and organs, as well as the external forms, of humans and animals. Many of these are highly realistic suggesting a considerable knowledge of human and animal anatomy.

During the Freshwater period, new freshwater billabongs and wetlands were created. These new habitats lead to depictions of new flora and fauna in the art. This is also the period of ‘contact art’ – which shows the arrival in Australia of Indonesian, Chinese, European and other peoples.

Not far from Ubirr is Burrungguy (the Indigenous name for an area known better as Nourlangie). Here, too, is some exceptional art, especially spiritual figures and dancing spirits, though the animal depictions are not as captivating as those at Ubirr. (In the photographs below, I have not, for either Ubirr or Burrungguy, dated the paintings according to to tripartite scheme, as I don’t know enough to categorise them with confidence, though the development of the art is clearly visible).

What is stunning about Ubirr is not just the art but the location, too. From the top of the rock one can see right across Arnhemland to the sea, a view that is wonderful, especially at sunset. A truly magical place. 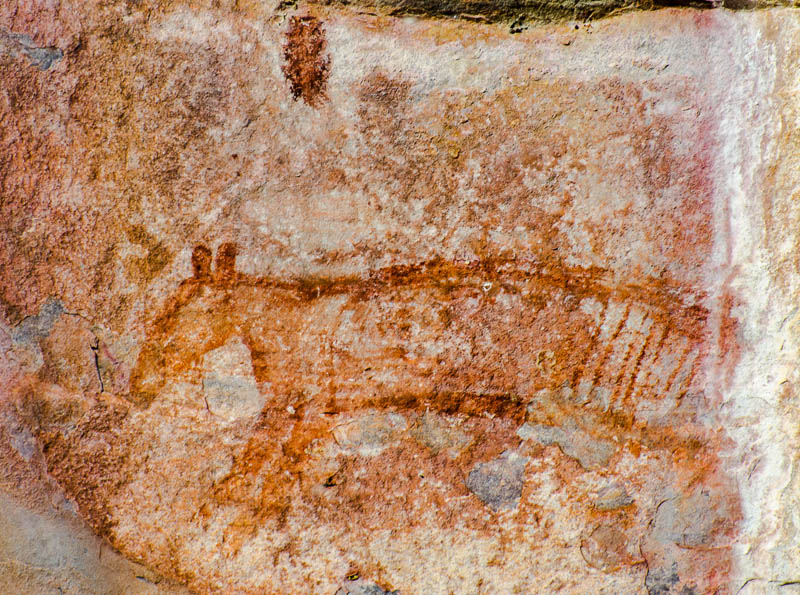 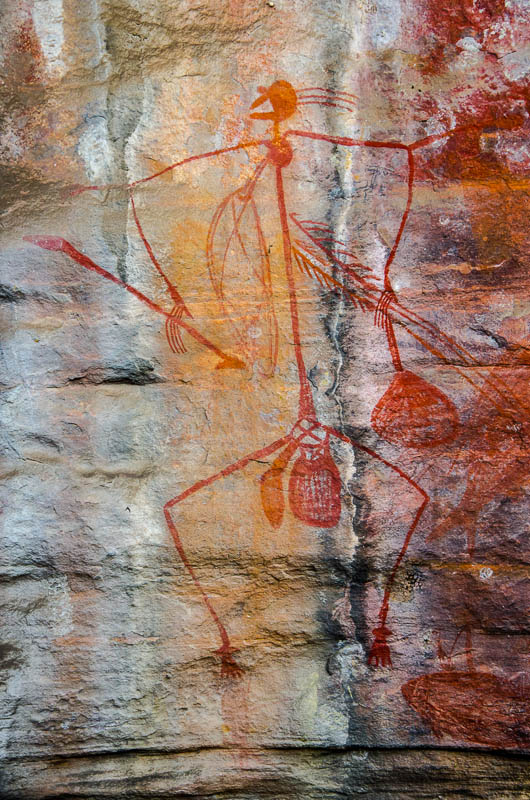 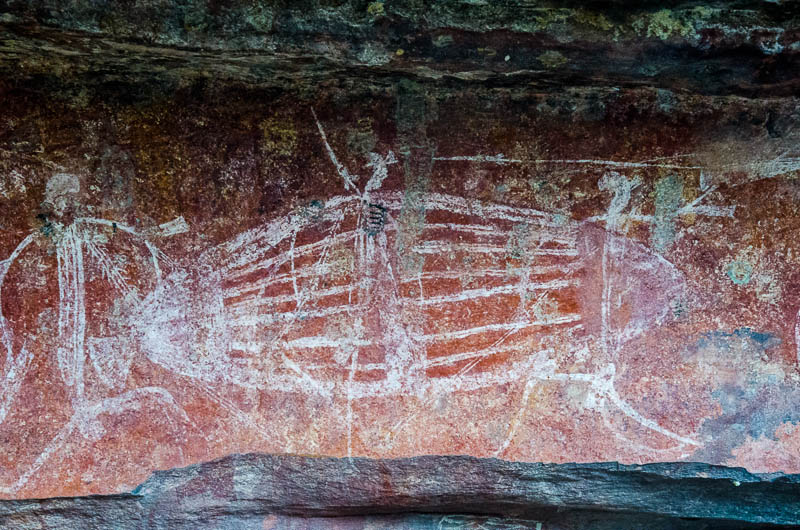 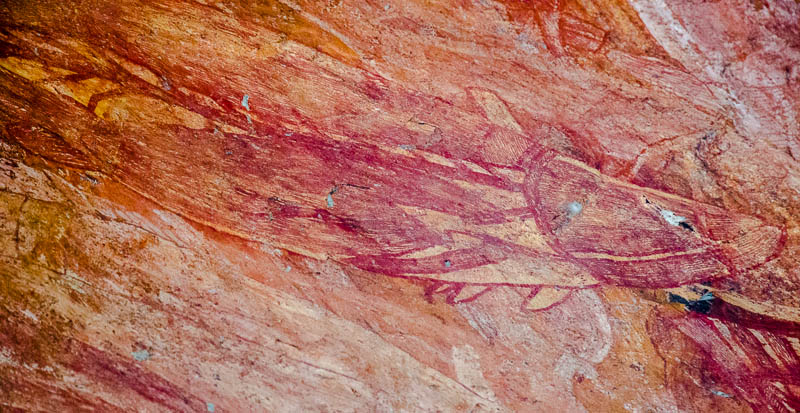 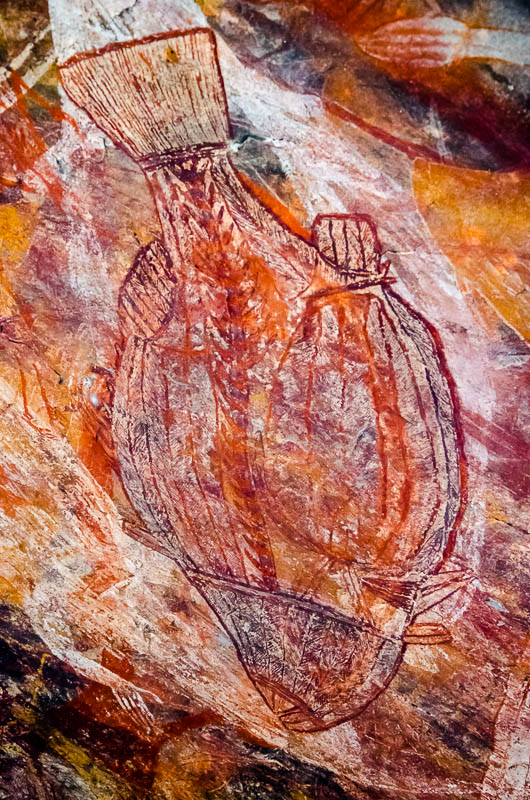 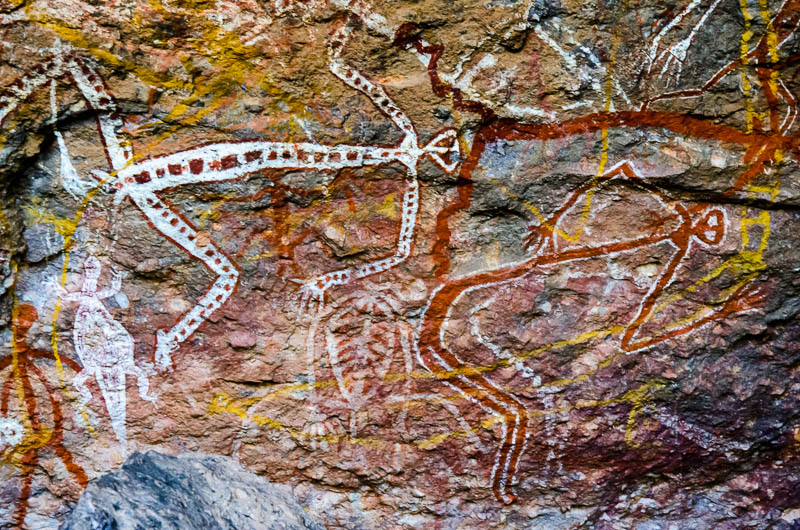 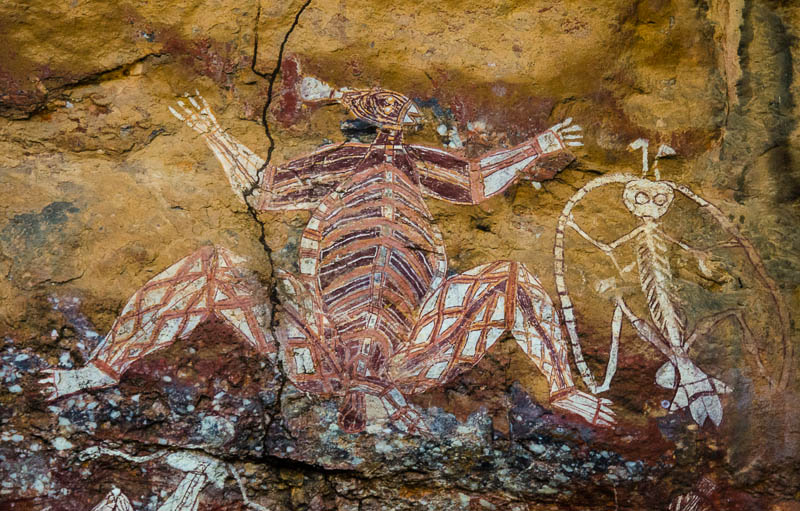 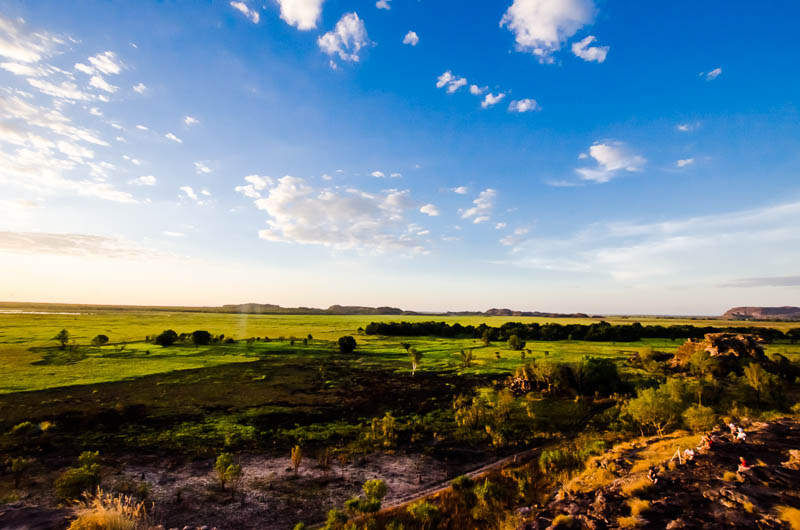