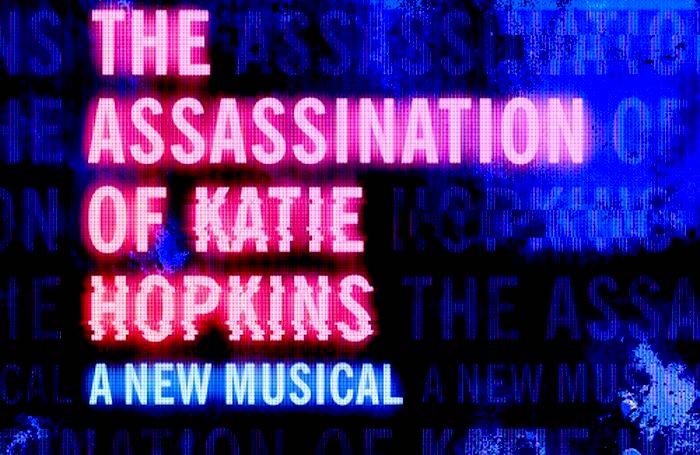 This essay was the main part of my Observer column this week. (The column included also a short piece on the row over the BBC’s broadcast of Enoch Powell’s ‘Rivers of blood speech’). It was published in the Observer, 15 April 2018, under the headline ‘Why provocateur Katie Hopkins is the perfect symbol for our tribal age’.

I have not seen the play. But I am going to write about it. Which seems an apt metaphor for the current state of public debate, an issue that lies at the heart of The Assassination of Katie Hopkins.

It’s a musical, written by Chris Bush and Matt Winkworth, that opens this week at the Theatr Clwyd, in Mold, north Wales, before transferring to London. And, even before it opens, it has generated much controversy. Hopkins, as might be expected, is none too pleased. ‘If you are black you are protected by your colour’, she wrote at the beginning of the year. ‘If you are Muslim – by your religion… But as a straight, white, conservative I am an acceptable target, unprotected by my honesty, and fair game for physical attack.’ ‘If my name was switched to another – a woman of colour, or a Muslim man’, she wondered, ‘would [it] still be acceptable and lauded by the left?’

The irony is that the musical itself asks that very question. (I have not seen the play, but I have viewed some of the rehearsals and read the script.) It might be a clickbait title, but The Assassination of Katie Hopkins is not about Hopkins, but about society’s response to a figure like Hopkins. Its real target is the pettiness of public debate – and the double standards of many liberals.

The play opens with Hopkins’s murder at a public event. A human rights charity, wanting not to look callous, decides it must find something nice to say about Hopkins for her memorial. Kayleigh, who is given the task of compiling a list of Hopkins’s positive qualities, comes to idolise her. Hopkins was, Kayleigh remarks, a ‘strong, unapologetic woman’, who speaks honestly without ‘waiting to see which way the wind was blowing’.

Kayleigh ends up starting a new campaign called Justice for Katie. She appears on TV, defending not just Hopkins but also hate speech, which she redefines as ‘passion’.

The play is a satire on the polarised character of public debate. The only choice we seem to have is either to demonise a figure such as Hopkins or to lionise her as “a strong, unapologetic woman”.

This tribal quality to debate can be seen in almost every sphere of public life, from Brexit to Zionism. The problem is not polarisation as such – politics, after all, is about taking sides – but the shallowness of political debate and attachments. It seems to matter less what people say than to which political or cultural tribe they belong. Inevitably, this has cut against a willingness both to listen to others and to scrutinise our own beliefs. Debate too has often become reduced to a ritual of provoking outrage and of being outraged. The kind of social interaction that began as online trolling seems to have invaded much of the public sphere. And this is as true of the right as it is of the left.

Hopkins is a perfect symbol of such an age. There are many people in the world, from atheist bloggers in Bangladesh to Christian voices in China, who do ‘say the unsayable’ and show great courage in challenging accepted norms. Hopkins is not one of them. She is a provocateur whose aim is to generate outrage. She succeeds because so many liberals rise to the bait, turning a shallow nonentity into a martyr for free speech.

There is a more profound issue, too. In demonising a figure such as Hopkins, we often give a free pass to politicians and institutions that are far more influential in promoting reactionary ideas, both in policy and in shaping public opinion.

Consider one of her most infamous columns for the Sun, in which she described immigrants as ‘cockroaches’ and called for gunboats to ‘drive them back to their shores’. It was an obnoxious, hate-filled piece that drew a torrent of outrage.

Yet I am always struck by how silent liberals are when it comes to the actual use by European nations of gunboats against refugees and the attempt to wall off Europe by paying millions to the most unsavoury regimes from Turkey to Eritrea to Libya to lock up would-be immigrants in hell-hole detention centres just out of sight of Brussels, Paris and London.

If half the energy expended on denouncing Hopkins had been used to challenge European migration policy, migrants might be in a better place now. But, then, to have done so would not have satisfied the demand for cheap outrage.