This essay, on the legacy of the controversy surrounding The Satanic Verses, was my Observer column this week.   (The column included also a short piece on a call to halt the housing of asylum seekers in Sunderland). It was published in the Observer, 30 September 2018, under the headline ‘The Satanic Verses sowed the seeds of rifts that have grown ever wider’.

Thirty years ago last week, Salman Rushdie’s The Satanic Verses was published. Rushdie was then perhaps the most celebrated British novelist of his generation. His new novel, five years in the making, had been expected to set the world alight, though not quite in the way that it did.

The novel was, Rushdie suggested, both about ‘migration, metamorphosis, divided selves, love, death’ and ‘a serious attempt to write about religion and revelation from the point of view of a secular person’. At its heart was a clash of race, religion and identity that, ironically, prophesied the controversy that engulfed the novel and still shapes our lives today.

Within a month, The Satanic Verses had been banned in Rushdie’s native India. By the end of the year, protesters had burned a copy of the novel on the streets of Bolton. Then, on Valentine’s Day 1989, came the event that transformed the controversy – Ayatollah Khomeini’s fatwa calling for Rushdie’s death.

The affair marked a watershed in British political and cultural life. There had long been conflicts between minority communities and the state, from the Notting Hill riots of the 1950s to the Grunwick dispute in 1977, to the inner-city disturbances of the 1980s. These were in the main political conflicts, workplace struggles or issues of law and order.

The Rushdie affair was different. Muslim fury seemed driven not by questions of harassment, discrimination or poverty, but by a sense that their deepest beliefs had been offended. Today, such grievance is entrenched in the cultural landscape. Not so in 1988.

The publisher’s response also seems from a different age. The fatwa forced Rushdie into hiding for a decade. Bookshops were firebombed. Translators and publishers were murdered. Yet Penguin never wavered in its commitment to The Satanic Verses. Today, all it takes to make publishers think again is the slightest hint that they might have given offence.

Rushdie’s critics lost the battle, but won the war. The Satanic Verses continues to be published. Yet the argument that it is morally wrong to offend other peoples and cultures has become widely accepted in the three decades since. The fatwa has, in effect, become internalised.

The Rushdie affair was an early expression of what we now call ‘identity politics’. Back in the 1980s, there was no such thing as the ‘Muslim community’. Britons of a Muslim background growing up in the 1970s and 80s called themselves Asian or black, rarely Muslim. The Rushdie affair gave notice of a shift in self-perception and of the beginnings of a distinctive Muslim identity.

Many anti-Rushdie campaigners were not religious, let alone ‘fundamentalist’, but young, leftwing activists. Some had been my friends and some friendships foundered as we took opposite sides in the controversy.

They were drawn to the anti-Rushdie campaign partly because of disenchantment with the left and its failure to take racism seriously, and partly because the left itself was abandoning its attachment to universalist values in favour of identity politics, easing the path of many young, secular Asians towards an alternative worldview.

That path was eased by official policy. Faced with secular militancy on the streets, policymakers – at both local and national level – often turned to religious leaders to act as conservative bulwarks, giving them new credibility. Secular Muslims came to be seen as betraying their culture (they belonged to the ‘white left’) while radical Islam became not just more acceptable but, to many, more authentic.

Some defenders of Rushdie began wrapping their arguments in the language of identity, too, questioning the very presence of Muslims as being incompatible with ‘western values’. In the 1990s, the US political scientist Samuel Huntington popularised the term ‘the clash of civilisations’, a notion that increasingly gained a hearing in liberal circles, particularly in the wake of 9/11. Many came to defend free speech and secularism and Enlightenment ideals not as universal values but as uniquely ‘Western’ products; more as tribal weapons in the clash of civilisations than as means of advancing political rights and social justice. It’s a world view that, ironically, mirrors that of the Islamists.

The controversy over The Satanic Verses brought into focus issues that have since become defining problems of the age – the nature of Islam, the meaning of multiculturalism, the boundaries of tolerance in a liberal society and the limits of free speech in a plural world. That, 30 years on, we still blindly wrestle with these issues reveals how little we have learned from the Rushdie affair. And how the lessons we have learned have often been the wrong ones. 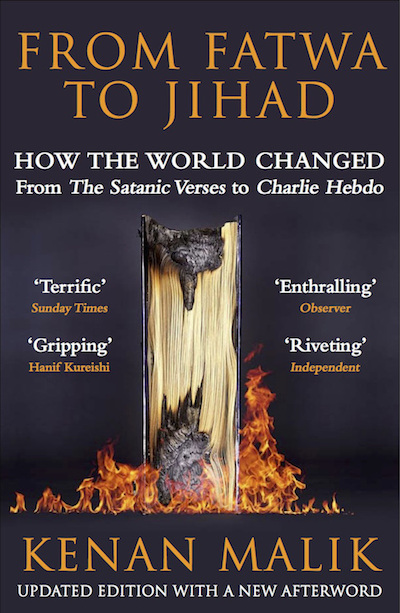 ‘Few writers have untangled the paradoxes and unintended consequences of political Islam as deftly as Malik does here.’
Maureen Freely, Washington Post

‘The great appeal of From Fatwa to Jihad is its pitiless observation… which raises it above the easy standards of one-sided polemic. No one gets away.’
Faisal Gazi, Guardian