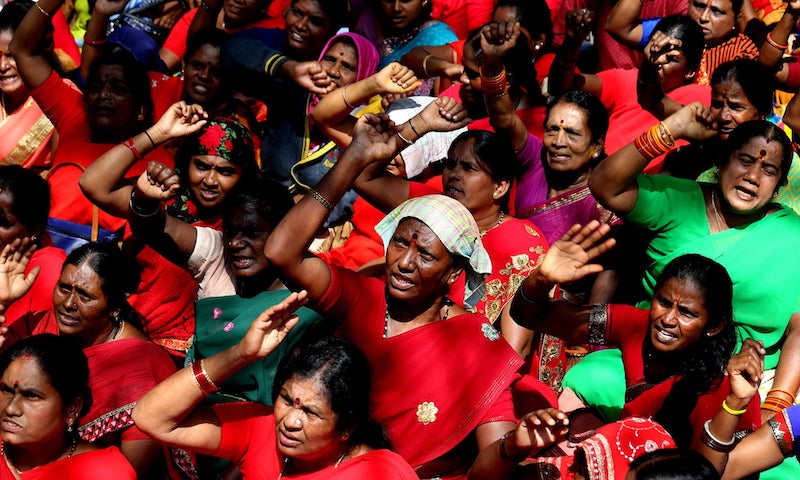 This essay, on the turmoil in India and its lessons for the rest of th world, was my Observer column this week. (The column included also a short piece on conservative snowflakes.) It was published on 12 January 2020, under the headline ‘It’s tempting to see India as a place apart. But it offers lessons for us all’.

It’s the ‘largest democracy in the world’. It’s also one of the most fragile, one in which dissent has often been curtailed and communal divisions inflamed. At no time have the vulnerabilities of India’s democracy seemed more exposed than they are now.

The return to power last year of the Hindu nationalist BJP, under the leadership of prime minister, Narendra Modi, has polarised politics. Modi clearly now feels empowered to pursue unyieldingly reactionary policies. The revocation of Jammu and Kashmir’s special status and the military lockdown of the state, the passing of the Citizenship (Amendment) Act (CAA), which openly discriminates against Muslims, and the unleashing of thugs on to streets and campuses to intimidate dissenters all bear witness to this agenda. At the same time, opponents of the BJP have discovered a new voice in recent weeks, millions taking to the streets in protest, defying the violence, official and unofficial.

It’s easy to see this turmoil as the product primarily of local politics. Some root causes are unique to India, but many have wider resonance. The electoral success of the BJP has been smoothed by trends familiar across the globe: resentment of a liberal elite, the implosion of the old order (represented in India by the Congress party), anger at the impact of globalisation and inequality, the rise of radical nationalism the exploitation of sectarian divides.

In the decades after independence in 1947, the Congress Party, which had led the struggle for liberation from British rule, governed India almost as the family fiefdom of the Nehru-Gandhi dynasty. Until the 1990s, popular disaffection found no national voice. It was the sectarian BJP, rooted in the philosophy of Hindutva, or Hindu chauvinism, which eventually became the vehicle of anti-Congress rage.

Liberalisation of economic policy from the 1990s led to increased growth. More than 270 million Indians moved out of poverty between 2005 and 2015. But the fruits of growth have become increasingly concentrated in the hands of a few. In the 1980s, India’s richest 1% took 6% of national income; today, it purloins 22%. That 1% now owns more than half the country’s wealth; the poorer half of India scrambles for a mere 4.1% of national wealth.

The BJP has seized upon anger at such disparities, presenting itself as the champion of the ordinary citizen against the cosmopolitan elites while swaddling that anger in chauvinist hatred.

Long before the BJP came to power, the Congress Party had shown itself willing to exploit sectarian politics for electoral gain. A turning point, as the historian Dilip Simeon observes, was 1984, the year that prime minister Indira Gandhi was assassinated by two Sikh bodyguards, angered by the storming of the Golden Temple in Amritsar.

Gandhi’s assassination led to pogroms against Sikhs, many fomented by Congress politicians. At least 3,000 Sikhs were killed. The violence, Simeon notes, ‘set a new standard for the normalisation of brutality and lawlessness in the Indian polity’ and acted as a ‘force multiplier’ for the BJP.

Three decades on, many Congress politicians continue to pursue what one MP, Shashi Tharoor, denounces as ‘Hindutva-lite’ policies. Far from shoring up Congress’s support, it has only helped strengthen the BJP. Who needs Hindutva-lite when you can have Hindutva-strong?

If the turmoil in India raises questions about democracy at home, it also holds lessons for political battles elsewhere. The key question today, it reminds us, is about who gives shape to popular disaffection.

Alienation from the old political order is a global phenomenon, whether that order is expressed in corrupted liberation movements, as in India and South Africa, or through faltering conservative and social democratic parties, as in Europe. Opposition movements giving voice to disaffection are often sectarian in form – a sectarianism that may be rooted in religious or ethnic identity, as in India or Turkey, or expressed in hostility to migrants and Muslims, as in much of the West. Everywhere, there is a hole where a national progressive movement should be. Which is why the nationwide popular opposition in India to the CAA, and to the violence meted out by BJP thugs, is so heartening.

The turmoil in India should also be a warning against any attempt to win back support from reactionary populists by stealing their illiberal clothes. What has really challenged the BJP is not the appeasement of sectarian sentiment but nationwide protests against bigoted laws and chauvinist violence. It’s a lesson for those in the West tempted to stem the growth of rightwing populists through harsher rhetoric about migrants or Muslims. If we really want to challenge divisive politics, it’s a temptation to resist.

The photo, of trade unionists chanting anti-BJP slogans on a march in Bengaluru, is by Jagadeesh Nv/EPA