David Papineau is Professor of Philosophy of Science at King’s College, London. He also publishes More Important Than That,  a blog about sport (and about ‘How philosophy can illuminate sport and vice versa’). I am delighted to republish on Pandaemonium his latest post, on the social function of amateur values in sport.  My thanks to David for contributing here, and do check out his blog.

David Papineau
Give Me a Defender of Amateur Values,
And I’ll Show You a Hypocrite

Many sports fans look back to a time when sport was unsullied by the imperatives of the professional era. As they see it, sports are meant for enjoyment, for friendly competition in a spirit of cooperative rivalry. To play for money is to contradict the very basis of sport, and so fair play and other sporting values inevitably go out of the window once the professionals take over.

What a load of tosh. I won’t go far as to say I reach for my gun whenever I heard the word ‘amateur’. But give me a crusade to keep a sport pure in the name of amateur values, and I will show you a hypocritical campaign designed to further some selfish interest.

In 1920 the American rower Jack Kelly entered the Diamond Sculls at Henley. He was the top American sculler that year, but this didn’t stop the Stewards of the Henley Royal Regatta rejecting his entry on the grounds that he had started his working life as a bricklayer, citing a local rule that denied amateur status to anybody who had ever earned wages as ‘an artisan or labourer’. The decision caused a furore and was widely resented in the States, but Henley stuck to its guns and didn’t change its rules for another two decades. (Kelly himself shrugged off the slight, going on to become a three-time Olympic gold medallist, a construction multimillionaire, and father-in-law to Prince Rainier of Monaco.)

You might think that the Henley rules were simple snobbery, but the clause before the one about artisans and labourers reveals a further purpose. This rule said that nobody ‘shall be considered an amateur who has been employed in and about boats for money or wages’. Back when the internal combustion engine was in its infancy, there were still plenty of working watermen who could row the socks of the part-time toffs who competed at Henley. The point of the rules wasn’t just to keep out the riff-raff, but to make sure that the college men and the city gents who filled the Henley boats could keep on winning the prizes.

Who remembers Alf Tupper, ‘Tough of the Track’? He flourished in the pages of British comics like Rover and Victor from the 1950s to the 90s. Every week he would leave his job in the welding shop, get into some scrape on the way to the athletics meeting, arrive in the nick of time, tangle with the stuffed shirts from the Amateur Athletics Association, gobble down his newspaper-wrapped lunch of fish ‘n chips, and then sprint past the posh chaps just before the finishing line.

He was immensely popular, largely because of the frisson engendered by the idea of a cheeky working-class chappie outdoing the snobs at their own game. But, of course, it was all a fantasy. The only way for someone like Alf to get the time and facilities to compete with the middle classes in their flexitime jobs would be to leave the welding shop and make money from running. Throughout the 20th century many international sporting authorities were determined that this wasn’t going to happen. Athletics was at the forefront, closely followed by tennis and rugby union, all desperate to keep their sports safe for the stockbrokers and solicitors who formed their core constituency.

The rules on amateurism were responsible for any number of injustices and absurdities. The great Native American athlete Jim Thorpe was stripped of his two 1912 Olympic gold medals because he had once been paid $25 for playing minor league baseball. Many of the finest mid-century tennis players, from Bill Tilden to Rod Laver, could only afford to keep playing by embarking on a touring treadmill of one-night exhibitions. (I myself saw Laver, Rosewall, Hoad and Gonzales in a tiny stadium in Durban in 1960s.) In the 1980s Bill Beaumont and Fran Cotton, models of rugby union probity and both now reinstated as stalwarts of the game’s administration, were banned from all rugby activities for 10 years for receiving royalties from their autobiographies.

Perhaps some of the officials who enforced this farrago sincerely believed in the moral superiority of amateurism. But they shouldn’t have. There is no reason to think that professionalism as such is morally corrupting. True, some aspects of life are undoubtedly tainted by the intrusion of money. Sex and friendship are the most obvious examples. But why include competitive sports in this category? If people want to watch elite athletes, and pay them for displaying their exceptional skills, what has gone wrong? We don’t think that painters or musicians are corrupted when they make a living from their art. No more should we of athletes.

No doubt the pressures at highest levels of sport reduce the attraction of quixotic generosity and increase the temptation to behave badly. And nowadays the highest levels are normally professional. But it would be a fallacy to infer that, to the extent that top athletes do behave badly, it is because they are professional. In other areas of life, we don’t expect people to forget their manners just because they are acting in a paid capacity.

Maybe there has been a falling-off in the standards displayed on the sports field in the past few decades. I’m not convinced across the board, but I do admit that top-level soccer is increasingly blighted by nasty habits. Still, it’s not as if professionalism in new to soccer. If there has been a deterioration, the cause must lie elsewhere, perhaps in the readiness of the fans and the management to allow the end of victory to justify any unsavoury means.

It is instructive to consider those sports, like cricket and golf, that long observed an institutional division between the gentleman amateurs and professional players, but had them competing alongside each other at the higher levels. In neither sport was there any sense that the professionals couldn’t be trusted to behave well in the crunch. If anything, it was the other way round. The dominant image of the dour Scots golf pro, or the sturdy county cricket player, was of a chap who played hard and knew a few tricks, but was never less than fair.

Historically, ensuring that the part-time middle classes remained competitive wasn’t the only motive for enforcing amateurism. When I grew up in South Africa, there were three unmentionable sins, practices we knew about but were only discussed in whispers. First came contraventions of the Immorality Act, sex across the official colour lines, not only exotic but illegal. Then there was ‘IDB’, Illegal Diamond Buying – the De Beers corporation was fiercely protective of its monopoly, and anybody dabbling in contraband was liable to be spirited away by the De Beers special police in the middle of the night. And finally – and just as taboo – was taking the Rugby League shilling, emigrating to play professional rugby in England.

Back then Rugby League was the professional code, and Rugby Union issued automatic life bans to anybody over 18 who played in a League match. Union was the game of the white South Africans, especially the Afrikaners, and Springbok success on the field was a central element in their national identity. South Africa was obsessed with resisting the lure of professional rugby. They didn’t care a hoot about preserving part-time sport—half the national team had sinecures in the police or army—but they did mind about their best players being struck off for life. It was a national tragedy when the great wing Tom van Vollenhoven, scorer of a hat-trick for ‘Boks against the British Lions, left to earn his living playing English League in the mid-1950s, and it was compounded a couple of years later when he was followed by another fine Springbok winger, Wilf Rosenberg, ‘The Flying Dentist’. 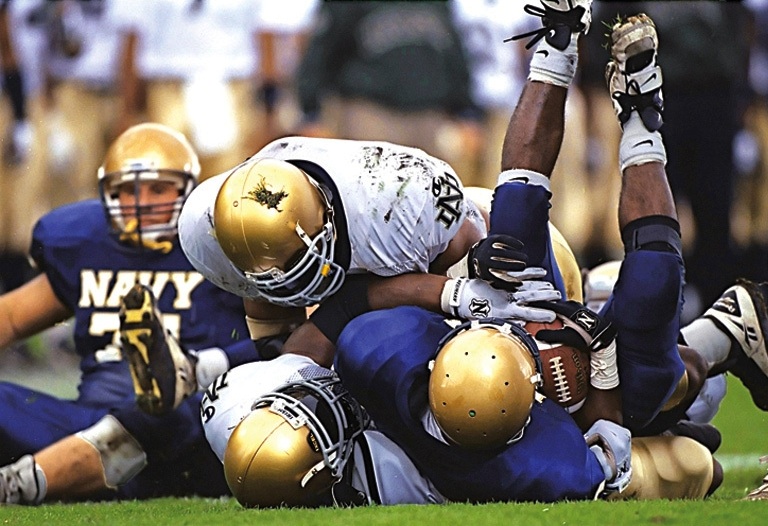 Thankfully, most of these contortions about amateurism have now faded into history. But there is one place they remain. American college sports are as fanatical about the amateur status of their athletes as any of the traditional authorities. The National Collegiate Athletic Association (NCAA) leaves no stone unturned in hunting down violations of their amateur rules.

The motive behind the NCAA obsession is not hard to discern. It’s not protecting part-timers, nor national pride, but simply preserving a system that makes staggering amounts of money. Led by basketball and football, American college sports generate billions of dollars, precisely because they are distinguishable from the professional leagues. But by the nature of the case this amateur status then means that all that money must flow to the colleges, coaches and administrators, and not a penny to the athletes themselves. (The colleges can’t even buy their athletes insurance against injury, because that would be a form of payment.)

It is hard to believe that this system can be sustained. Everybody else gets rich from the labour of unpaid youngsters, most of whom end up with nothing. But this is just one of the paradoxes at the heart of the strange (and often unconstitutional) structure of American spectator sports. I will return to this topic in a future post.