This year marks the centenary of the beginning of the Great Migration, the exodus of six million African Americans from the US South to the northern cities. The Museum of Modern Art in New York is marking that anniversary by bringing together in an exhibition all 60 panels of Jacob Lawrence’s epic portrayal of the exodus. Lawrence was one of America’s most important twentieth century painters and his Great Migration series is perhaps his most famous work, a work as much of historical memory as of art. They can seem simple and innocent, almost childlike. There was, however, far more to the paintings than simple naivety, as the critic Robert Hughes pointed out in his book American Visions.  Lawrence. Hughes observed, ‘was not interested in the kind of idealized, fake-primitive images of blacks – the Noble Negroes in Art Deco guise – that tended to be produced as an antidote to the toxic racist stereotypes with which white popular culture had flooded America since Reconstruction’. The Great Migration is in Hughes’ words:

notable for the language it does not use. Lawrence was not a propagandist. He eschewed the caricatural apparatus of Popular Front Social Realism, then at its high tide in America. Considering the violence and pathos of so much of his subject matter – prisons, deserted villages, city slums, race riots, labor camps – his images are restrained, and all the more piercing for their lack of bombast… There isn’t a trace of the sentimentality that coats Picasso’s Blue Period, or the work of most American Social Realists.

The dark, somber backgrounds, occasionally illuminated by fashes of primary colours, allowed Lawrence to depict not only a physical journey, but also a spiritual one, capturing the sense of the fear, anger, despair and hope that travelled too. Lawrence used the same colours and figures and shapes throughout the series, though subtly shifting the character of the paintings as they move from the South to the North. This both infuses them with a sense of unity, and allows Lawrence to link the personal stories to a universal human drama, an intertwining that was at the heart of much of his work.

I am, in a tribute of my own, publishing in a series of posts all 60 panels from Lawrence’s series. In the first post, I  wrote about the Great Migration and of Lawrence’s depiction of it, and published Panels 1-10.  Panels 11-20 are in my second post in this series. And here are Panels 21-30, together with Lawrence’s captions to the paintings that are as simple and as bare as the paintings themselves. The paintings, as Robert Hughes observed, comprise ‘a visual ballad, each image a stanza, compressed, like the blues, to the minimum needs of narration’.

21
Families arrived at the station very early
in order not to miss their trains North. 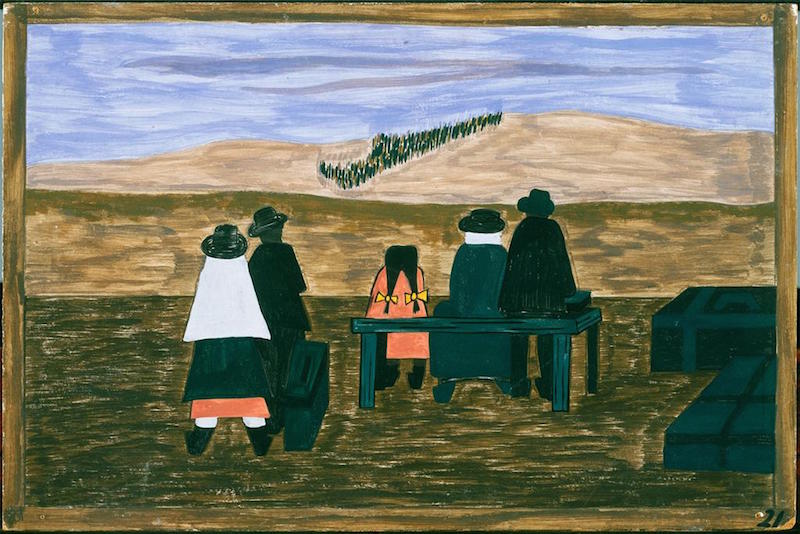 22
Another of the social causes of the migrants’ leaving
was that they did not feel safe, or it was not the best thing
to be found on the streets late at night.
They were arrested on the slightest provocation.

23
And the migration spread. 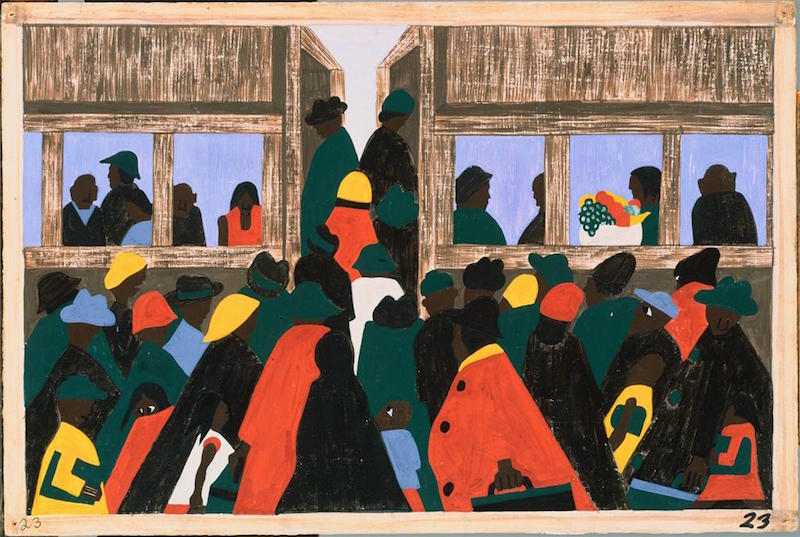 24
Child labor and a lack of education
was one of the other reasons
for people wishing to leave their homes.

25
After a while some communities were left almost bare.

26
And people all over the South
began to discuss this great movement.

27
Many men stayed behind until
they could bring their families North.

28
The labor agent who had been sent South by
Northern industry was a familiar person in the Negro counties.

29
The labor agent also recruited laborers to
break strikes which were occurring in the North. 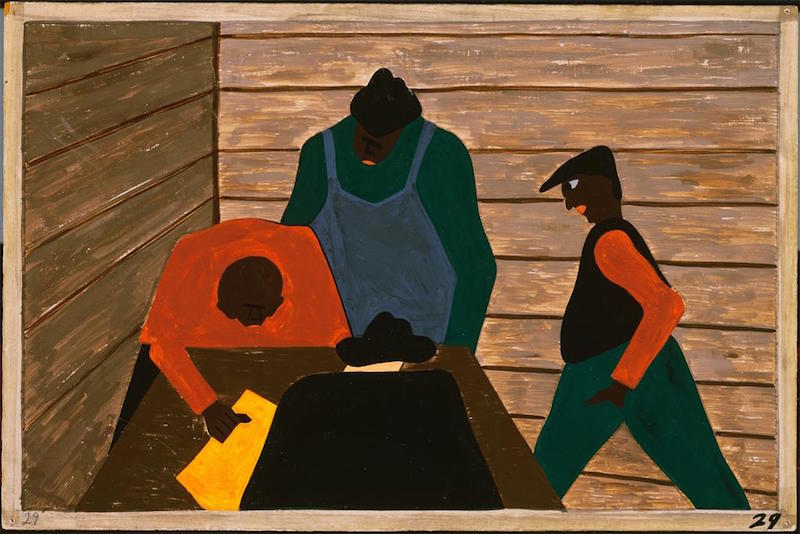 30
In every home people who had not gone North met
and tried to decide if they should go North or not.